Kicking off this week’s must-have games roundup is Wild Blood, Gameloft’s first game to be built upon the impressive Unreal Engine, which lets you live out the story of Sir Lancelot. There’s also a new title from Marvel, the awesome sequel to VS. Racing, and Square Enix’s latest Final Fantasy title.

Wild Blood is Gameloft’s first game to be built upon the Unreal Engine — the same engine used by Infinity Blade — and as you can tell from the trailer above, it looks incredible. But it’s not just the visuals that make this game great.

In Wild Blood, you live the unforgettable journey of Sir Lancelot, whose quest is to free the world from evil and save Queen Guinevere from the mad King Arthur.

King Arthur has gone mad, fueled by his jealousy toward Lancelot for romancing his wife, Queen Guinevere. In his desperation, Arthur has been tricked by his sister, the all-powerful sorceress Morgana Le Fey, to open the Hellgate and allow all forms of demons to enter the world. Meanwhile, Morgana has captured Guinevere and holds her hostage on the magical island of Avalon.

Your journey will take you through ten stunning levels, and you’ll face 20 different enemies, including epic bosses. You’ll choose from a wide range of weapons, including axes, long bows, and swords. And once your quest is complete, you can enjoy the game’s terrific multiplayer mode, which allows you to compete with up to eight friends in 4v4 team deathmatch.

Gameloft has produced some pretty terrific titles for iOS, but Wild Blood is in a league of its own.

Avengers Initiative is the first installment in a new episodic series from Marvel, which allows you to play as some of your favorite Marvel characters and fight against the world’s most notorious villains, including Wendigo, Abomination, The Kronan, and The Skrulls.

In this title, you play as The Hulk, and you use swipe gestures to fight. As you progress, you’ll acquire exclusive costumes, unlock super-powered abilities, and upgrade your combat stats. In fact, this game is a lot like Infinity Blade when it comes to fighting, only with your favorite Marvel characters.

If you like Infinity Blade, then, you’ll love this.

If you love fast-paced top down racers, then VS. Racing 2 should be your next App Store purchase. As its name suggests, it’s the sequel to the original VS. Racing, and it boasts some incredible improvements.

There’s a massive campaign to enjoy with more than 36 tracks, and three vehicles to choose from with unique handling, upgrades, and “pimping.” There are also some great power-ups that will help ensure you’re first across the finish line, including nitro, shockwave, oil slick, heat-seeking missiles, and more.

When you’ve finished with the campaign, VS. Racing 2 has a great multiplayer mode in which you can challenge friends online in intense “ghost” races. 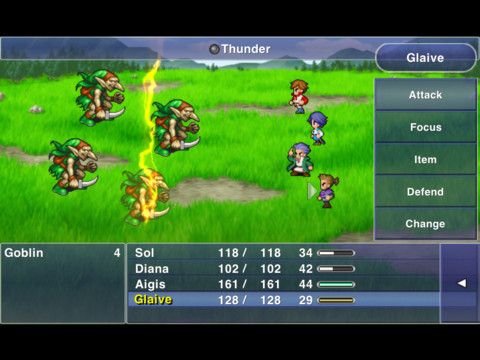 Final Fantasy Dimensions actually hit the App Store last week, but because of an issue affecting its in-app purchases, we decided not to feature it. That’s now been fixed, however, and so this game comes highly recommended.

Drawing upon the roots of the series with such features as beautiful 2-D pixel art, a battle system involving job change-based character growth and ability combinations, and a classic story of light, darkness, and crystals, FINAL FANTASY DIMENSIONS delivers the best of FINAL FANTASY, retro and fresh alike, directly to you.

The great thing about this game is that, unlike other Final Fantasy titles on iOS, you can try it for free. You can play the entire prologue and it won’t cost you a penny, which gives you a chance to check it out before you decide whether to purchase the other chapters. There are four altogether, and as this is a Square Enix game, they’re a little overpriced in comparison with other iOS purchases. But they’re certainly worth every penny.