The Arctic. A tribe of mystical, peace-loving Eskimos. A greedy, visionary corporation named Toxi Co. (get it?). A freak accident unleashes goo that mutates all in its path, including a massive polar bear named, you guessed it, Fatty Sparkles.

Can’t you picture this on your television or movie screen? How about as a turn-based multiplayer digital board game? I bet you can see it both ways, and that’s what developer, Lantern, is banking on. Co-founders Austin Hice and Carlo Eugster in 2011, Lantern began with a dream to make games influenced byt he storytelling they learned about while working in film and television. This past weekend at the Penny Arcade Expo (PAX) in Seattle, they showed off a pre-release four-player demo of the game, and it caught our eye.

Calling Frost Wars a digital board game, Hice and Eugster stood and talked with me a bit at their booth, which was tucked away on the sixth floor in the huge Washington Convention Center. Behind us, four expo attendees played on screens which were connected to what Eugster said were Macs. Turns out, the Lantern guys are as much a part of the Cult of Mac as you are. 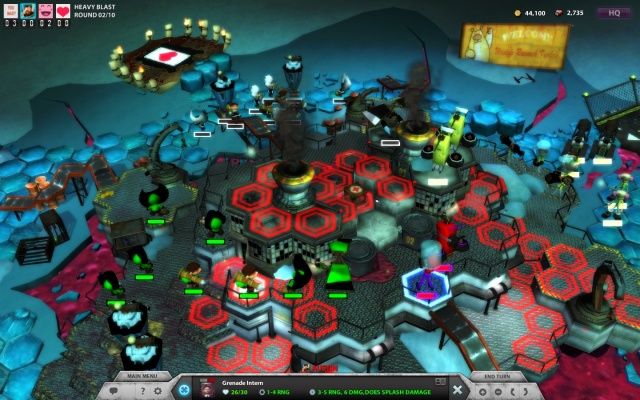 The game has players choosing sides, playing as either Eskimo or Corporation. The turn consists of bringing units onto the playing board, itself made up of hexagonal movement tile spaces, much like Civilization V’s playing board. The units each have their own set of attack moves and range of movement, and the object is to take over the opposition’s position and own the map.

Originally, the game was designed for this asynchronous play style, until the Lantern devs decided to bring their early alpha testers into the design process. The players wanted a faster-paced game mode, allowing them to play at the same time, live. Thus, Speed Mode was created, and this is the mode that was being demoed at PAX.

The game looks delightful, mostly due to the whimsical artwork and media-friendly story set up. The Eskimos look super cool, the corporate hacks look sufficiently menacing, and Fatty Sparkles looms over them all like a mob-connected enforcer. It’s got all the, er, sparkle, you’d expect from an animated show on a station like, say, Adult Swim or Comedy Central. Check it out in the video trailer below:

The company plans to release the game to a web-based technology at first, allowing players using any platform to beta-test it. Then, they’ll work on platform-specific releases for Mac, iOS, Android, and PC. For now, you can enter your email address and sign up for the beta, and visit the game’s page over on Facebook.