Take the back-of-the-envelope scribblings of a tech blogger with the appropriate degree of skepticism, but according to this breakdown of what the build-of-materials (BOM) cost of the upcoming iPad mini could be, Apple will sell their 7.85-inch tablet for $299 when it debuts later this year… and still make over $100 in profit on each unit sold.

The breakdown was done by blogger Sameer Singh over at Tech-Thoughts.net, based largely upon the existing costs of components used in the iPad 2, Nexus 7 and Kindle Fire.

That’s not a bad way of doing things. Here’s the breakdown of what Singh thinks the iPad mini would cost to build: 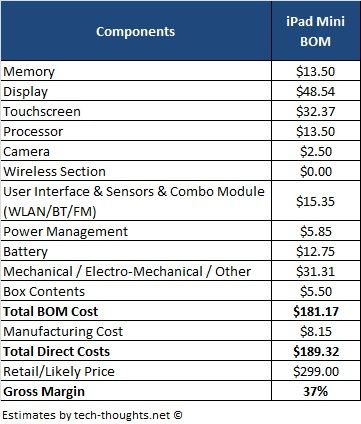 Those numbers are speculation, but if they’re correct, Apple — who won’t sell a product unless they can make a hefty profit off of it — would price the iPad mini at $299 to maintain a greather than 30% gross margin on the device.

Considering Google is selling the Nexus 7 at a loss at $199, which is a price Apple won’t emulate (and, given the iPad’s popularity, a mistake it doesn’t have to make) these numbers look good to us. Read Singh’s full post for more on how he came up with those numbers.

What do you think? Is there any chance Apple will sell the iPad mini for less than $299? Let us know in the comments.