Headlining this week’s must-have iOS games roundup is an awesome new platformer called Mikey Shorts, which offers its own unique style of play focused on speed. We also have The Simpsons: Tapped Out, which makes its App Store debut for the second time; VOTE!!!, the latest title from Infinity Blade creators Chair Entertainment; and a great space-age building game from Gameloft.

I’m always on the lookout for awesome new platformers, and I’ve found one in Mikey Shorts. This isn’t just another retro-styled Super Mario Bros. wannabe; it has its own, unique visuals and style of play. The aim of the game is simple: complete each of its 72 levels as quickly as possible.

Your main objective in each level is to release every human you pass — without doing this, you won’t be able to pass through the checkpoints and progress. You’ll also want to collect as many coins as you can, because these will buy you all kinds of cool items that allow you to customize your character.

But your focus should always be on speed. At the end of each level, you’ll be awarded 1-3 stars for your efforts. The faster you go, the more stars you get.

Every level also has a hidden pair of shorts, and you can earn an achievement for collecting every coin. This gives you the incentive to go back and play every one after you’ve earned your fastest time.

The great thing about Mikey Shorts is that it’s suitable for almost every gamer. There are no enemies to worry about, so you can hand it to your kids and they can spend as much time as they like not dying. But for the seasoned gamer, there’s plenty of objectives and achievements to make Mikey Shorts a hugely enjoyable game

The Simpsons: Tapped Out — Universal (Free)

Deja vu? That’s probably because The Simpsons: Tapped Out has been in the App Store once before, but EA had to pull it because it became so popular its servers couldn’t handle it. Thankfully, that’s no longer the case, and the free-to-play title is back — in the U.S. at least — with some great improvements.

If you didn’t get chance to experience it the first time around, then you missed out. The game allows you to build your own Springfield from scratch after a nuclear explosion — caused by Homer — wiped out the entire town. Design a new town from scratch, anyway you’d like it. You can grow and harvest tomacco on Cletus’s farm, make Apu work ridiculously long shifts in the Kwik-E-Mart, party with Duffman at the Duff Brewery, and lots more.

You’ll also need to help Homer find Marge, Bart, and the rest of their friends and family; and complete all kinds of tasks to earn… donuts!?

The game promises to be “life-ruiningly fun,” with Retina graphics, voiceovers from real Simpsons actors, exclusive animated scenes you won’t find anywhere else, and more. It’s only available in the U.S. store for the time being, but we expect it to go international soon.

VOTE!!! is the latest title from Chair Entertainment, the developers behind the hugely successful Infinity Blade series. But it’s nothing like Infinity Blade at all. Instead, it’s a slapstick cartoon fighter that allows you to play as President Barrack Obama or Mitt Romney and fight it out for the White House.

You can dress your candidate in a variety of iconic American outfits, accessories, and items; then take your pick from a selection of hilarious weapons, including the ice cream cone, microphone, the foam hand, the “balloon of justice,” and more. You’ll then do battle on the White House lawn, in the Oval Office, or on the Debate Stage; while each candidate lays the “verbal smack down” with their most popular catch phrases of the political campaign trail.

Now you really can have an impact on who becomes president. And we know why Infinity Blade: Dungeons is taking so long to make. 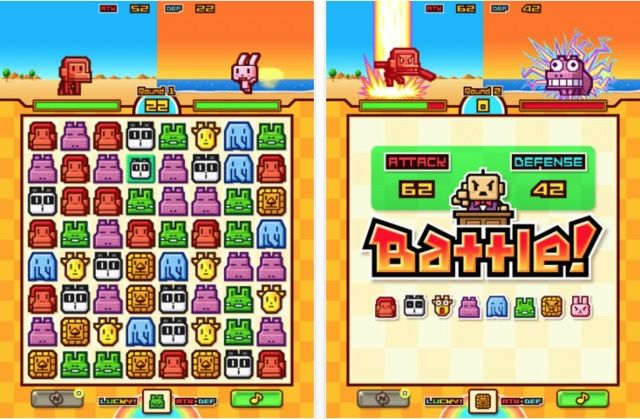 Zookeeper is already a pretty popular puzzle game, making its debut on iOS back in June 2011, almost 30 years after it first launched as an arcade game. But this isn’t your regular Zookeeper. In Zookeeper Battle, you use the animals you catch by solving puzzles to battle against other people online in 30-second rounds.

Some of the animals you collect will be used to attack, while others will be used for defense. Of course, the more you collect, the better your chances of beating your opponent, so look out for the special items that will help you out. You’ll play four rounds, but if there’s a tie at the end you’ll play a fifth. If victory still isn’t decided, the player with the most remaining life wins.

It’s a pretty simply game to learn, but it’s challenging to play. And once you start battling, you’ll find it hard to stop.

I have to admit, I became bored of building games. But that was until Gameloft took us into space. Cosmic Colony lets you build your own space-age settlement on a faraway planet. You’ll have to manage your resources to make your inhabitants happy and your colony prosperous, and complete many missions as you progress.

You’ll explore space and seek out new planets in search of artifacts, discover enigmatic landmarks, fight off space pirate invasions, and cope with unexpected events like falling meteorites and natural disasters. You can also interact with friends in-game, and visit their colonies to boost each other’s reputations.