We’re nosey as anyone here at Cult of Mac and right now we’re having a big contest where readers can win a free bag from Waterfield Designs. All you gotta do is pour out the contents of your bag, snap a pic, upload it, and maybe you’ll win.

It’s probably not fair of us to demand you reveal all the goodies in your bags without showing you some of our own toys, so today we’re jumping inside the bag of Cult of Mac Social Media Editor, Buster Heine, to see everything he carries with him to have a good time. 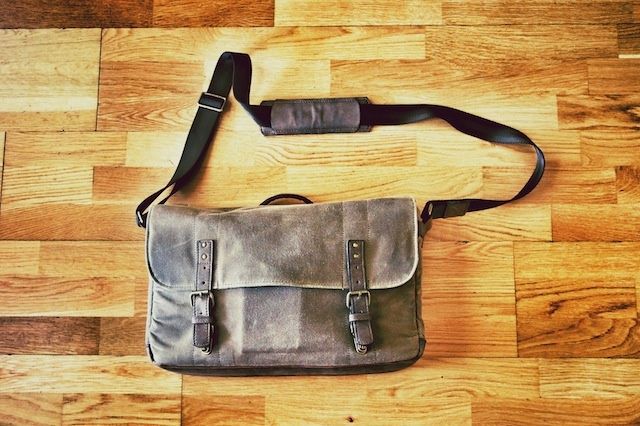 My Gadget Bag – right now I’m using a Union Street Bag from Ona Bags. I’ve enjoyed it so far. The best part about it is that you can reorganize the velcro barriers and set the compartments inside the bag the way you want. It’s not perfect, but it’s one of the best bags I’ve found that almost looks stylish.

1. 15-inch MacBook Pro with Retina display. I just upgraded from an 11-inch MacBook Air and the transition hasn’t been easy. It’s heavier, and bulkier, which makes a huge difference if I’m carrying my bag for a few hours. But after using the bigger MacBook Pro for a few weeks, I’m loving the big screen and beastly powers of this machine.

3 – MacBook Pro charger. I used to carry the extension cable with me too, but I’ve realized it’s just a lot of extra cable I don’t need.

4. Sony Nex-7 – Holy cow, I love this camera. I really don’t know how to do all kinds of advanced stuff with a camera, so an expensive DSLR doesn’t make sense for me, which is why I love mirrorless cameras. The Nex-7 has a huge sensor, takes good low light photos, it’s small, and has a great design. I’ve been playing with an Olympus OM-D lately too but I love the Nex-7 too much to stop carrying it around.

5 – Galaxy Nexus – My iPhone 4S tried to go swimming in the ocean a while back and died. I’ve been using the Galaxy Nexus as its replacement and I actually like it a lot, which is scary. The screen is great. Apps aren’t that bad and neither is the OS. The camera sucks though, so I carry a Sony Nex-7 with me. I’ll be happy when the new iPhone comes out.

6 – iPad with 4G – I use my iPad as a hotspot more than anything when I’m away from my house. If the Wifi at a cafe sucks then I’ll just tether to my iPad. Other than that, I’ll occasionally read some articles from Pocket on it, or play a game of Hero Academy with John Brownlee.

7 – I read a lot. I really enjoy Tim Wise’s essays so I’m finally getting around to reading his book White Like Me.  I also think it’s good to mix things up when you’re reading, so I’ll read a serious book and fiction book at the same time and carry them with me. Right now I’m also reading The Family Fang because one of the characters is also named Buster.

8 – Cheap headphones. I always lose my headphones or accidentally throw them in my washing machine so I just buy the cheapest ones I can find now.

9 – I never write in my notebook but I carry it around because I dream that the day will come where I’m struck by a bolt of inspiration and have to jot down all kinds of crazy notes in my notebook.

10 – Gerber Knife-tool. I grew up on a ranch in New Mexico where carrying a knife at all times was a necessity. Now it’s more just a habit, and this Gerber multi-tool is pretty sweet because it doubles as a tri-pod for my camera.

11. Sony SEL30M35 Macro Lens. The kit lens on the Sony Nex-7 is great, but for macro shots I carry an extra lens just in case. It also just makes me feel cool to have two lenses so, why not throw it in the bag anyway?

That’s pretty much it. I try not to carry a lot of extra cables and memory cards and other stuff because it just takes up space and you have to hunt through your bag to find things which is a major pain in the ass when I’m out and about, so I try to keep it as simple as possible.

Here’s what everything looks like tucked away in their compartments, ready for an adventure. 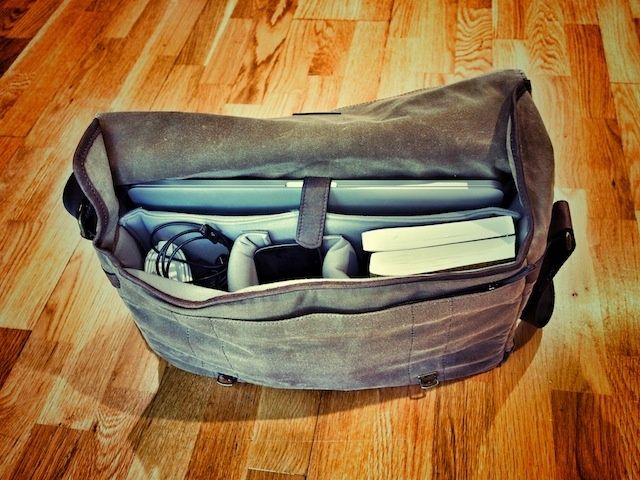 Got any questions about what’s in Charlie’s bag? Want to share with us what’s in your gadget bag? Jump into the comments below!

Make sure to enter the Show Us What’s In Your Bag Giveaway!