Kicking off this week’s must-have games roundup is a new game from Zynga that will blow your mind. It’s called Horn, and it’s a third-person action game with incredible, console-quality visuals and great gameplay. That’s accompanied by Mad Skills BMX from the creators of Mad Skills Motocross; Jack Lumber, the first game from the SEGA Alliance; Cafeteria Nipponica from Kairosoft, and more. Look out for the awesome new platformer from Ravenous Games, creators of the award-winning League of Evil.

Horn has been described as a cross between Infinity Blade and Zelda. It looks a lot like the former, but it promises to be a “completely unique” third-person action game in which you can enjoy a “beautiful and engaging console-style world.”

You play Horn himself, a young blacksmith’s apprentice who wakes up to find his village overrun by “fantastic, and sometimes humorous, monsters.”

It is revealed these creatures are actually the people and animals from your village transformed by a curse, and you alone have the power to free them. On your incredible adventure you carry the loud-mouthed head of one such fantastic creature with you – a somewhat uncooperative and ill-tempered but grudgingly helpful sidekick.

Along with your companion, you’ll use your sword, crossbow, and trust musical horn to explore then lands, defeating the enemies, and solving the puzzles throughout your quest to free your homeland from its curse.

Horn is one of a small few games from Zynga that isn’t a freemium release, but personally, I see that as a good thing. And I don’t think you should have any qualms about paying $7 for this terrific game.

The aim of the game is to complete each track in the fastest possible time. The more you play, the faster you get. You’ll use innovative swipe controls to jump and gain speed, while rocking out to an awesome soundtrack by punk band Strung Out.

The most addictive thing about this game is its ability to connect to Facebook so that your can race against your friends’ best times on every track. You can even watch replays of their times to find out how they achieved their best. It’s when you start competing that the game gets hard to put down.

Apologize now to your girlfriend, boyfriend, wife or husband for all the time you’re about to spend on the best BMX racing arcade game of all time.

Jack Lumber is the first title born from the SEGA Alliance, a new publishing initiative that helps independent developers launch mobile games for smartphones and tablets. Created by Owlchemy Labs, this wonderful puzzle game sees you use the supernatural powers of Jack Lumber to massacre the forest and make granny proud.

You see, a tree killed Jack’s granny and he’s out to get revenge — by chopping down the entire forest. His superpower gives him the ability to freeze time, which suspends logs in slow motion. You then draw the path that Jack’s axe will follow, eliminating every single block.

But don’t worry about the animals. Jack loves animals, so let’s them all live in his log cabin rent-free after he’s destroyed their woodland homes.

Every level requires skill, timing, and logic to solve successfully — and you’ll have fun with each and every one. 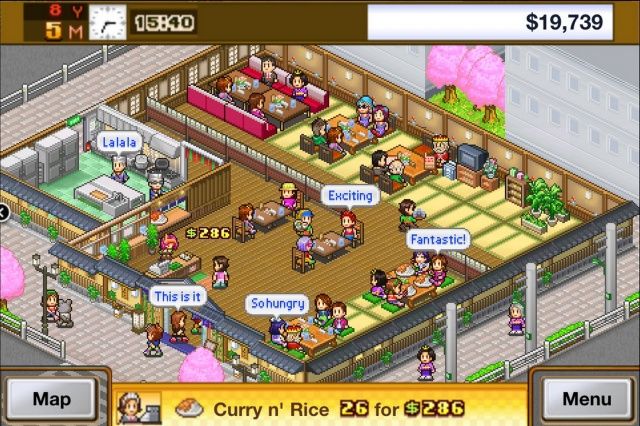 Cafeteria Nipponica if the latest simulation title from Kairosoft. It’s time to pick up your chef’s hat and hit the kitchen; you’re the “chef de cuisine” of your own restaurant. You’ll have to find the ingredients, research recipes, and spice up your culinary repertoire.

You’ll decide every detail of the floor, from tables to TVs, and you’ll need to keep your customers happy. As you earn points, you’ll be able to host a variety of events from eating contests to cooking classes, further boosting your restaurant’s popularity.

If you’re a fan of Kairosoft’s other simulation titles, you’ll be delighted with Cafeteria Nipponica.

If you’re a fan of platform games, you may have heard of League of Evil for iOS. Random Heroes comes from the same developer, and it features similar retro visuals and classic platform gameplay. You join a group of unlikely heroes who have set out to save the world. Monsters from another dimension are trying to take over Earth, and it’s up to you to stop them.

Blast your way through over 30 levels with 15 characters, collecting as many coins as you can along the way so that you can upgrade your weapons and become stronger, faster, and more lethal. Enjoy Game Center integration with achievements to collect, Retina-ready visuals, and iCloud game syncing that will ensure the progress you make on your iPhone also appears on your iPad.