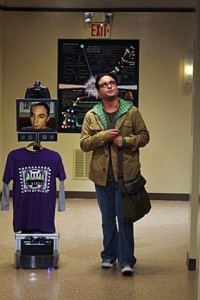 Remember that Big Bang Theory episode where Sheldon decides he won’t live long enough to download his consciousness into a robot body to attain immortality, so he hides himself in his room to focus on eating healthy and avoiding the dangers of life, both real and imagined? No? Well, you really should watch The Big Bang Theory more. It’s on the CBS website.

Anyway, in the episode, Sheldon uses what he calls the “Shelbot” to narrowcast his face into a wheeled robot with a big giant monitor on the top of it and a T-Shirt hanging from the front.


This robot is a self-balancing stand that holds one iPad while a second iPad runs an app that becomes the remote control. You connect to the wheeled-iPad-stand via the second iPad app, and engage in an interactive video call, driving this robotic Segway around on it’s gyroscopic wheel tube.

Setting up Double on your iPad is as easy as downloading an app. The same app is used for the driver’s iPad and the robot’s iPad. Once you create an account, your driver’s iPad will display all of your Doubles anywhere in the world from one screen.

Connect to Double by tapping its icon, which will initiate an interactive video call. During the call, touch the anywhere to engage the driving controls. Slide your thumb to drive and turn. Additional controls adjust your height remotely, park yourself with the kickstands, and more.

You can drive from an iPad, iPhone, iPod touch, or desktop web browser.

Now we simply sit back and wait for the geniuses at THe Big Bang Theory to do “Shelbot, part two” and rake in the profit. Wait, no, that won’t work.

While telepresence is nothing new, and telepresence robots are already in practice around the globe (the one on the TV show is based on a real system in use in some hospitals), this is the first we’ve seen that is priced at an almost affordable level, using off the shelf software/hardware (iPad).

Source: Double Robotics
Via: The Verge