Heading up this week’s must-have iOS games roundup is a brand new Ghostbusters game that promises to be the best augmented reality game in the App Store. We also have a great online strategy game in the form of Tiny War XD, Activision’s legendary Pitfall!, and more.

No matter how much you dance around in your pants whistling the theme tune, you’ll never be a Ghostbuster. You can get pretty close, however, with Ghostbusters Paranormal Blast for iOS, which promises to be the “best augmented reality game ever to hit the App Store.” Using your iOS device’s camera, it gives you the opportunity to battle ghosts in your neighborhood and rid your own city of the paranormal.

“Turn you mobile device into your most powerful weapon against paranormal menaces and kick some ectoplasmic butt!”

This title features high-resolution 3D visuals for devices with a Retina display, with well-known foes like Slimer and Spectral Librarian, plus 14 new ghosts to hunt and collect across more than 20 missions. You’ll get rewarded for every ghost you bust, allowing you to upgrade your Proton Pack, Neutrona Want, Flight Suit, and Ghost Trap.

Why aren’t there more augmented reality games like this on iOS? 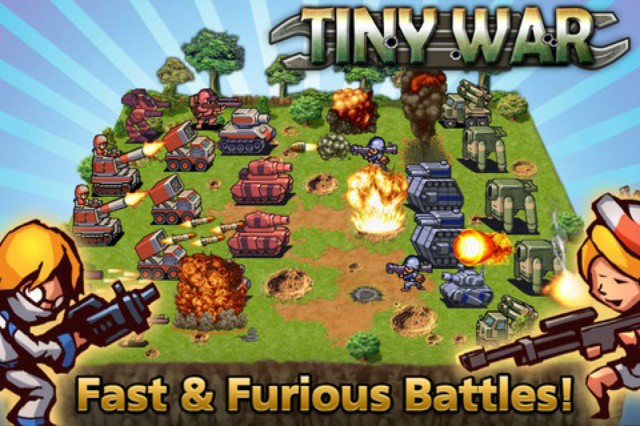 Tiny War XD is a terrific massively multiplayer online war strategy game, in which you develop your own military base, produce weapons and train troops, then deploy them to fight against enemies and rival players in an effort to expand your military dominance.

Tiny War’s ease of play and richness sets it apart from other games; it will also test your military strategy as you battle for supremacy. The game is packed with loads of buildings to construct, many types of troops, and tons of missions to complete. A unique battle format and special 3D mini games offer a rewarding and fun gaming experience.

The great thing about Tiny War is you can develop your fortress while you’re offline, so that it’s ready to go when you get connected. It promises “tons of things to build, missions to complete, [and] bases to attack.” The worst thing about it is that it’s hugely addictive, so be prepared for that. You have been warned.

Remember the 1982 Activision classic Pitfall! from the Atari 2600? It’s probably been a while since you played it, but that’s about to change. The jungle-crawler has been revamped and relaunched on iOS — 30 years after its first debut — promising thrilling new environments and twists on the classic gameplay that will “appeal to fans of all generations.”

The free-running adventure has been likened to titles like Temple Run. Your mission is simple: run as far as you can through ever changing environments with narrow trenches, dark caverns, and cascading waterfalls. Along the way you’ll level up and trade in your loot to unlock handy power-ups that will enhance your experience and “customize your wardrobe.” When you hit those high scores, you can share them on Facebook and Twitter to stake your claim as the king of the jungle.

Whether you played the original or not, Pitfall! on iOS is well worth a look — especially if you enjoy free-running games that are hard to put down. It’s a universal title compatible with all your iOS devices, priced at just $0.99.

https://youtu.be/S-YVfRuyHBk
Brick breaking games have been around for as long as I have, but Draw Breaker offers a unique twist. Rather that moving a platform from side to side to hit the ball, you draw your own platform.

Draw Breaker takes the classic brick breaker genre, but adds a TWIST—you control the ball by DRAWING PLATFORMS. You have complete freedom to aim your shots by drawing platforms at any angle. Create shots that are impossible in other breakout style games. This was how breakout was meant to be played on a touch screen device.

There are five episodes to play, each of which have nine unique episodes. You’ll battle 16 monsters throughout, each with their own personalities and abilities, and there are ten power-ups to help you along, including bomb balls, acid balls, fire balls, and multiballs.