Last week we found out that back in 2006 Apple Industrial Designer, Shin Nishibori, was asked to create mockups of what an iPhone-like device would look like if created by Sony. Nishibori’s prototype mockups have become a hot item of debate in the Apple vs Samsung trial as Samsung was hoping to use them as evidence that Apple copied Sony.

The court recently dismissed the images, but Samsung wanted to get their creator on the stand. Even though Shin Nishibori no longer works for Apple and now lives in Hawaii, Samsung was hoping to subpoena him to the court and have him testify against Apple. How were they going to get him there? A $60 check.


Included in Shin Nishibori’s subpoena was a $60 check to cover expenses of the trip. Maybe Samsung hasn’t checked the prices on flights from Hawaii to San Jose in a while, but a round-trip ticket costs a lot more than 60 bucks. Another possibility is that Samsung knew their subpoena to Nishibori would not be properly served but they wanted to appear to have made an effort.

Nishibori’s lawyer sent the subpoena back to Judge Koh in San Jose, claiming the subpoena was not properly served, and that Mr. Nishibori is trying to recover from several health issue. A full transcript of the letter is attached below: 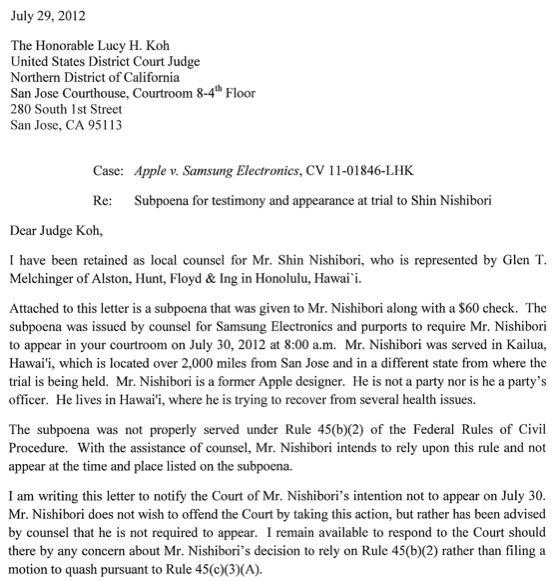