Here’s something cool you may not have noticed yet. With its new Keynote update, released alongside Pages and Numbers yesterday, Apple replaced the unique icon that features the somewhat depressing lyrics to The Bitch of the Living by Spirit Awakening with a new 2012 icon that displays a famous quote from the company’s Think Different commercial. The same quote now appears on several of Apple’s Mac OS X icons.

Here’s to the crazy ones. The misfits. The rebels. The troublemakers. The round pegs in the square holes. The ones who see things differently. They’re not fond of rules. And they have no respect for the status quo.

You can quote them, disagree with them, glorify or vilify them. About the only thing you can’t do is ignore them. Because they change things. They push the human race forward.

While some may see them as the crazy ones, we see genius. Because the people who are crazy enough to think they can change the world, are the ones who do.

This is the same quote that features on Apple’s icons for Notes, All My Files, and TextEdit. 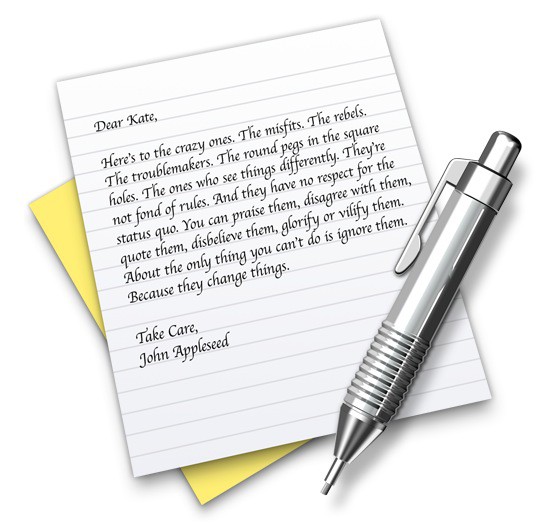 Apple’s original Think Different commercial was narrated by Richard Dreyfuss, but I much prefer the Steve Jobs version.