Once you see it, you can’t unsee it: Mountain Lion is all about ripping down arbitrary distinctions between types of data and getting every device you own sharing. And that’s why “Sharing” isn’t just a button in many of Mountain Lion’s menu bars that makes it a little bit easier to fire off an email or a Tweet: it’s an extension of Mountain Lion’s core philosophy. 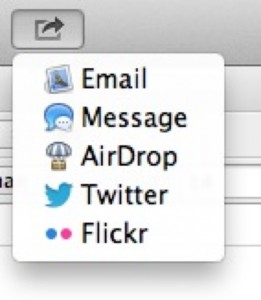 In Mountain Lion, you’ll see a new Share button in many of the core apps, and what it does depends on the app you’re using and the type of file you’re trying to share. Click on a JPG in Finder, for example, and you can easily share it using Twitter, AirDrop, Flickr or Messages; click the Share button in Safari, and you’re given the option to email the page, share it on Twitter or Message it to someone else. It’s all contextual: share a video and you can upload it quickly to Vimeo; share a PDF, and your only options are AirDrop and Messages.

There’s nothing revolutionary to the Share button, but it eases a surprising amount of friction, and makes OS X feel a lot more like iOS: you’re not saving documents in one program and then loading them into another, but telling apps to work together, to talk to one another.

Sharing eases a surprising amount of friction, and makes OS X feel a lot more like iOS by telling apps to talk with one another.

Thanks to built-in integration in Mountain Lion, popular microblogging service Twitter is just another way in which you can share what you’re doing with other people in your extended network. Mountain Lion’s Twitter functionality isn’t going to put the likes of Tweetbot out of business, but it is smooth, beautifully animated and tied into Notification Center, making sending out a quick Tweet, pushing an image up to your followers or replying to a direct message as simple as clicking a button, all without ever downloading an official client. Twitter saw a huge uptick in users when iOS 5 came with Twitter support built-in, and we imagine Mountain Lion will help that user base expand even further.

Finally, there’s Facebook sharing, which doesn’t currently work in Mountain Lion. We can’t review the exact functionality, but Apple promises that when Facebook integration launches this autumn, it’ll allow you to post links, photos and comments on Facebook as easily as you already can with Twitter. We’ll update this section of the review then.

Once you’re actually using all of Mountain Lion’s Sharing features, 10.8 feels like the most integrated operating system out there: one in which apps seamlessly talk to one another, not just across your system, but across all your systems. Mountain Lion is a truly social operating system in every sense of the word, and Apple’s sharing philosophy is the driving force behind that.

Mountain Lion is a truly social operating system in every sense of the word, and Apple’s sharing philosophy is the driving force behind that.