The poor working conditions in Foxconn’s Chinese factories have been widely documented for some time now, but the reports have seemingly done very little to dissuade workers from applying for Foxconn jobs.

Thousands have reportedly turned up to the company’s Chengdu and Zhengzhou plants in the hope of securing a “summer job” that is likely to involve the assembly of Apple’s new iPhone, and possibly even an “iPad mini.”

According to M.I.C. Gadget, workers have flocked to the Chengdu plant in huge numbers to secure the summer jobs, which reportedly have just one requirement: applicants must have good eyesight.

The temporary workers are likely being brought in to ramp up production of Apple’s upcoming iOS devices. We know a new iPhone will be making its debut this fall, and if recent rumors are to be believed, it will be accompanied by a 7.85-inch iPad mini.

Sources claim that production of the new iPhone is on a very small scale right now, in a “trial production stage.” But it’s likely to go into overdrive as the device’s launch gets closer. 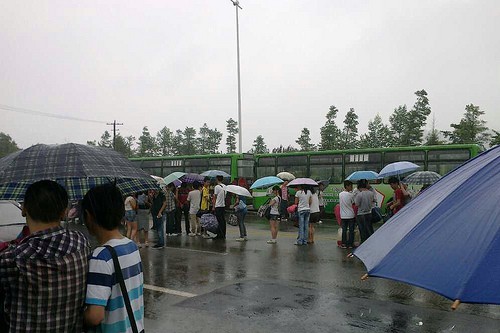 M.I.C. Gadget reported a similar situation at Foxconn’s Zhengzhou plant back in January. Lines of workers stretching 200 meters turned out to secure jobs at the plant, with Foxconn reportedly looking to add an additional 100,000 people to its workforce. The report stated that workers would start on a basic salary of 1650 yuan ($261), which could rise to 2400–3200 yuan ($379-$506) after appraisals.

Although the pay is low, Foxconn workers will live for free within the company’s dormitories, and all of their food is paid for. This is believed to be one of the reasons why the factories attract so many young workers.