If you’re reluctant to spend $99 on an Apple TV just to enjoy your iOS games on your HDTV over AirPlay, check out this Kickstarter project for the GameDock by Cascadia Games, the team behind Cavorite for iOS. It plugs into your TV via a HDMI connection and allows you to “play classic games the way they were meant to be played,” in full 1080p. It even has two USB ports on the front so that you can hook up a pair of retro gamepads.

Have you ever played a great retro game on your iPhone, only to be frustrated with the touch controls? Or have you wanted to play an awesome iPad game with a friend, but two people holding one tablet just doesn’t feel right? With the GameDock for iOS you can play classic games the way they were meant to be played: with two controllers and a TV.

The GameDock looks just like a retro console right out of the eighties, only your iPhone, iPad, or iPod touch is the game cartridge. With your device docked inside, the GameDock turns into a console that plays your favorite iOS games, and allows you to control them using a retro USB gamepad (one included). It’s already compatible with over a dozen iCade titles, and you can bet there’ll be support for more when the GameDock starts shipping. 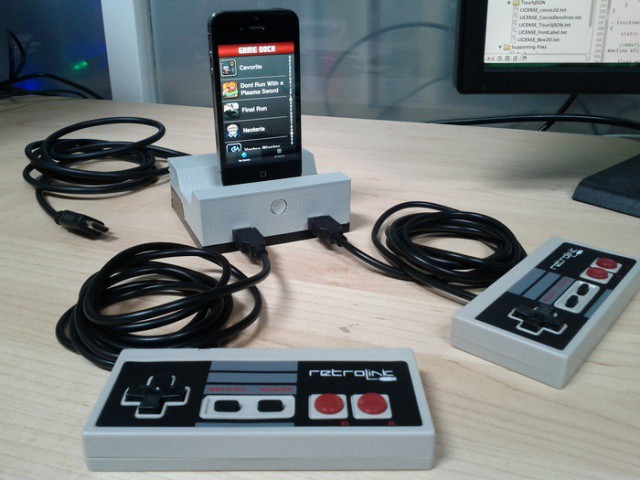 The GameDock also comes with its own app, which allows you to control your game library from the comfort of your couch using the controller. And when you go traveling, you can use the GameDock without a TV using your iPhone/iPad display via Bluetooth.

Like all Kickstarter projects, the GameDock needs your support before it can enter production. You can pledge any amount of money you’d like, but $150 will guarantee you the GameDock plus one retro controller as soon as they start shipping.