Heading up this week’s must-have apps roundup is Color Splash Studio, a terrific photo manipulation tool originally built for Mac OS X, which has finally made the leap from Mac App Store to iPhone. We also have a great music video mixing tool from Algoriddim, the guys behind Djay; a camera app that’s perfect for your kids, and more.

You may already be familiar with the fantastic Color Splash Studio from MacPhun, because it has been available on Mac OS X for some time. Priced at just $0.99 — with 60% to celebrate its launch — the app allows you to convert your images to black and white, and then inject color back into specific areas.

You can import images from your camera roll, or from Facebook; quickly switch between different effects; adjust your paint brushes; adjust hue, saturation, and gamma incredibly easily; export to Instagram, and lots more.

I’ve used Color Splash Studio on my Mac for a number of months, so I had no doubts it would be just as great in the iPhone. Admittedly it’s not quite as easy to use on a tiny 3.5-inch display, but having it in your pocket with the ability to edit your photographs on the go is great. This app is a steal at $0.99, so grab it while it’s cheap.

Vjay from Algoriddim, the guys behind the hugely popular Djay for iOS, is a unique music video mixing tool, which allows you to combine music videos from your library, or create your own and apply them to your favorite tracks.

vjay transforms your iPad into a cutting-edge mashup machine, directly integrated with the media libraries on your iPad. Mix and scratch your favorite music videos from iTunes or combine songs from your music library with personal video footage into an interactive audio visual experience. You can even use your iPad’s built-in camera to add your very own clips to the mix. The first of its kind on the iPad, vjay lets you get creative with your content, display directly to a TV, stream wirelessly via Apple TV, or record your performances live to share on your favorite social channels.

vjay combines the worlds of music and video in an innovative and creative way, it paves the way for the next generation of personal and professional video creativity, it is the start of the next era of music videos as we know it.

Vjay is priced at $9.99, so it may not be an app you want to buy just to play around with for half hour. But if you’re into music and creating and editing music videos, that price tag is well worth it. No other iPad app offers this kind of functionality is such a polished package that’s so simple to use.

Thanks to its live-tiled user interface, Analytics Tiles App looks like it was designed by Microsoft for its “Metro” Windows Phone devices, and that certainly isn’t a bad thing. In fact, this is probably the prettiest way to monitor your website on your iPhone. The app describes itself as “an entirely new and innovative way to view website statistics on iPhone,” and we couldn’t agree more.

You can customize Analytics Tiles to suit you, by dragging, dropping, adding, or removing tiles so that the information most important to you is the easiest to access. As you’d expect from an analytics app, there are tiles for page views, visits, average time spent on your site, and lots more. Tap on each tile to get a more detailed view of your statistics. There’s also support for multiple websites — just swipe to switch between them. 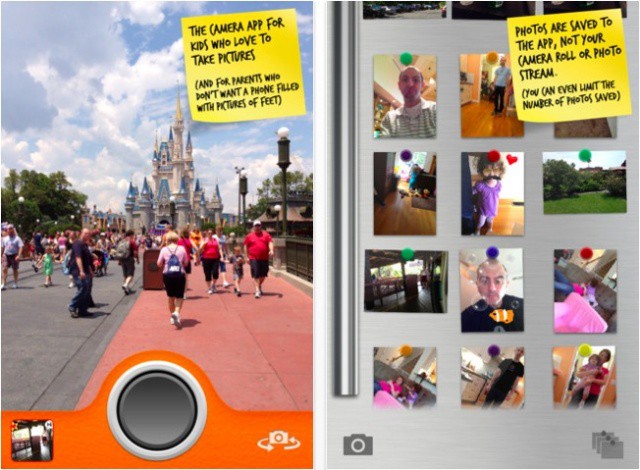 Our kids love taking pictures on our iPhones. The problem is, they’re almost always blurry shots of their face or the floor that you’d never want to keep. And you can almost guarantee they’ll delete several photos you did want to keep while they’re playing around in your camera roll.

Thanks to FirstCamera from the aptly named Tantrum Apps, this is no longer a problem for me. FirstCamera is a camera app designed for children. It’s big and bright and there are just three buttons on its main user interface, including a big one for snapping pictures, one to switch between front- and rear-facing cameras, and one to access the camera roll.

But the best thing about FirstCamera is that it has its own camera roll, so your kids can’t delete your precious pictures accidentally while they’re playing with your device — they have access to their own photos only. If you do come across an image they’ve taken which you’d like to keep, you can save it to your own camera roll.

FirstCamera also allows your kids to apply effects to their photos, with a number of filters, colors, paints, and decorations — like mustaches, hats, and glasses.

This app has become incredibly popular in our house, and I couldn’t recommend it enough if your kids like taking pictures on your iPhone.

SoundHound has updated its popular music searching and discover app for iOS, introducing a whole host of new features. Version 5.0 makes SoundHound faster than ever before, according to the release notes, and brings high-resolution album art and images, an improved user interface, a new SoundHound Player with LiveLyrics, and more.