When Apple first showed off the iPad Smart Cover, the idea was simple: what’s the point of owning a device as beautiful as the iPad if you’ve got to cover it all up in a bulky case so no one can see it? What’s the point of the iPad even being designed to be so slim, so pleasant in the hand, if you’re immediately going to slap a half pound of plastic or leather sheath on top of it?

The Hex Code Folio Case for iPad is the exact opposite kind of case. It’s a professional-style case made for professionals who want to make their iPad part of their business folio. It’s beautifully made and looks quite handsome, but if you’re not the sort of person who spends hours every day in business meetings wrestling with sheaves of print-outs, this isn’t the case for you. 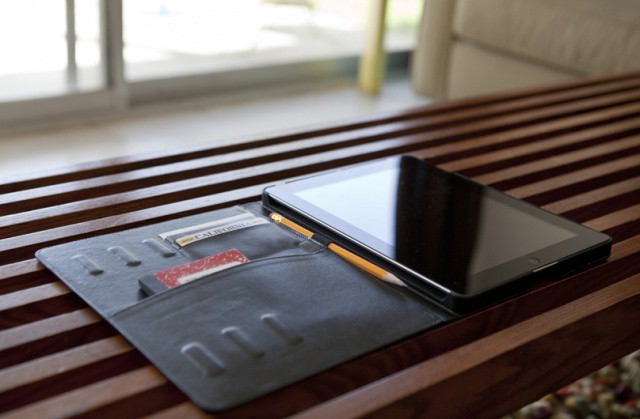 In both look and feel, the Hex Code Folio is a beautiful case.

Made of soft, sumptuous leather in black, brown and red, the Code Folio treats your iPad like just another part of your business folio. The iPad itself is held in place using a sturdy plastic frame, with a special custom angled speaker channel that amplifies the iPad’s built-in speaker. 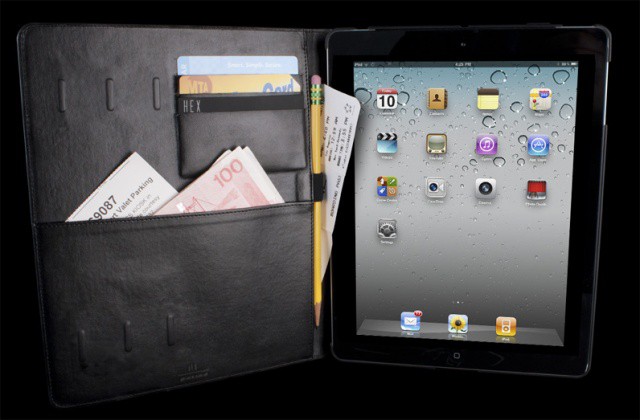 On the inside cover of the Code Folio has two document pockets and three card holders, as well as a loop to holster a pen or stylus inside the Code Folio’s spine: there are also six understated bumps for adjusting the angle of your iPad when it’s in the case.

For what the Code Folio is, it’s a great case. The stitching and construction are top-of-class. When closed, the Code Folio holds itself together with a stretchy band that you wrap around the front cover. There’s even a conveniently cut-out and re-enforced pinhole for the iPad’s camera. This feels like a proper folio for a serious executive.

The problem is that this is a thick mother.

Look, while we’re personally not the kind of guys who want a professional folio-style case for our iPads — we blog in our underpants most of the day, for goodness sakes — we understand why people would want one. The Hex Code Folio looks very professional and it’s a great catch-all solution for people who want to integrate their iPad into their business lives. We get it.

But why is the Code Folio so thick? We’re not kidding: the Code Folio case is so thick that if I just looked at it from the side, I might guess that there were two iPads inside, not just one.

The problem is the construction of the plastic casing that holds the iPad in place, along with the custom speaker channel. This is solid construction, but the result is that it adds another iPad’s worth of thickness to the case. Combine that with the thickness of the two leather covers and you’re talking about a case that takes up just way, way too much room, even before it gets shoved full of papers, as it is meant to.

If Hex had favored a simpler solution for holding the iPad in place — say, a few elastic bands in each corner — the Code Folio would be half as thick and none the less functional. It’s just silly.

Then there’s the other big problem. Most cases of this sort offer a way to prop up the iPad in multiple angles, including a shallow lean to more easily accommodate on-screen typing. The Code Folio offers three main viewing angles, but it totally leaves out a way to slightly incline the iPad for typing. Frustrating.

If you’re an executive who wants to integrate his iPad into his board meetings, but wants to be subtle about it, the Code Folio’s not a bad choice. The construction quality is high, and the Code Folio just looks and feels beautiful. Even so, you might find the Code Folio’s inexplicable thickness to hamper real world usability, and if you do any typing on your iPad’s touchscreen in landscape at all, you’re bound to be quickly frustrated.

Pro: The leather is attractive and feels great. Solid construction. Lots of useful pockets for documents and pens. A very professional case with a price almost anyone can afford.

Con: Thick enough to hold two iPads, not one. No way to angle it for onscreen landscape typing.