The wedge design of the MacBook Air has been patented by Apple, meaning that the Cupertino company now owns the rights to “the distinctive wedge or teardrop profile” of the sexy notebook. Apple’s D296 patent means that the MacBook Air has solidified the tapered, wedge-like design for its class of computer.

Instead of focusing on concrete details, the new patent covers the general aesthetic of the MacBook Air’s design. Over the past year or so, dozens of laptops, dubbed “Ultrabooks,” have been copying the metallic look and feel of the Air. Could this new patent mean that Apple is setting its legal sights on Ultrabook competitors? 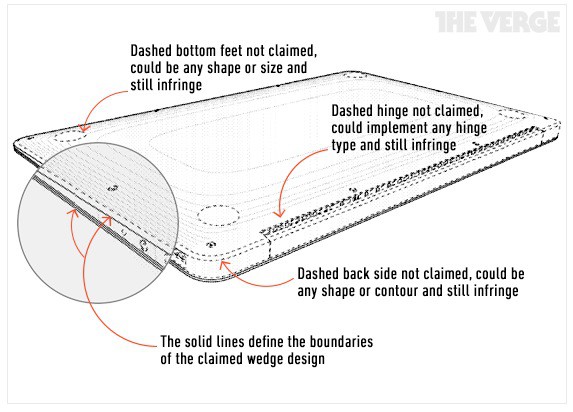 According to The Verge:

“In determining infringement, courts look at whether the allegedly infringing device and the design patent are substantially similar in overall appearance to an “ordinary observer,” excluding minor differences. You can see below how Apple has dashed out the unimportant details of the notebook, like the rear contour, hinge, side ports and feet, and instead focuses on the overall wedge shape and look of the device with solid lines. That’s the aesthetic Apple has patented here and a notebook with hinges, feet or a shaped back different than the MacBook Air could still be infringing as long as the rest — primarily the claimed wedge profile — is substantially similar.”

So Ultrabook makers like Lenovo, Dell, HP and Asus could all be potentially under fire. Apple has been aggressive with its mobile patents, and there’s no reason it won’t fight just as hard in the laptop market. Either that, or Ultrabooks could start looking less like Airs.

We’re sure that Apple is hoping for the latter.