Apple typically score high in brand loyalty and product satisfaction. As a result, it doesn’t come as a huge surprise to hear that the new iPad and iPad 2 are leading tablet satisfaction surveys. Nor is it surprising that the iPads aren’t just scoring better than other tablets, they’re kicking some Android butt.

According to the latest numbers from Changewave, 81% of new iPad owners are very satisfied with their devices and while an additional 15% are somewhat satisfied. That means 96% of users can be called happy with the new iPad.

Even the iPad 2, which Apple reduced in price by $100 when the new iPad launched, is making Apple customers happy. 71% said they are very satisfied and another 26% are somewhat satisfied. That leads to 97% being happy with their choice (a number that’s actually a hair higher than the new iPad).

That contrasts with Samsung Galaxy Tab owners. Only 46% of Galaxy Tab buyers describe themselves as very happy with their purchase. 41% are somewhat satisfied, which puts overall satisfaction to 87%.

Amazon had slightly fewer very satisfied customers when it came to  the Kindle Fire tablet (41%) but also pushes higher than the Galaxy Tab when it comes somewhat satisfied owners (53%). That leads to an overall satisifaction rate of 94%.

Changewave also noted that satisfaction levels had dropped from earlier surveys. The new iPad was down 1% in the very satisfied category since numbers recorded in March and the Kindle Fire was down 15% from a February report.

Looking forward things look good for Apple. Chagewave noted that 7% of those polled are planning to buy a tablet in the next 90 days and that 73% of those individuals said that they will be buying an iPad. 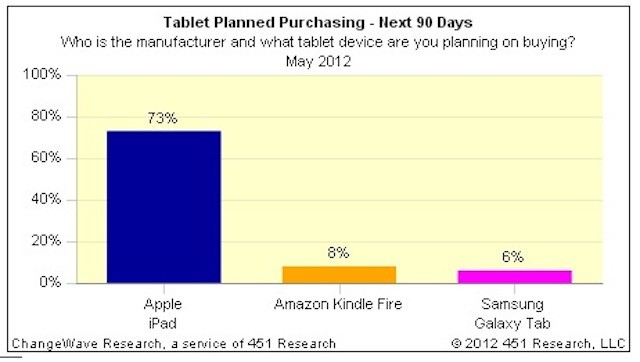