When you jailbreak an iOS device, you are given access to Cydia, the wild west frontier of tweaks, themes and apps you can’t get in Apple’s own App Store. Jailbreaking gives you the freedom to customize your device the way you see fit by installing various plugins, system-level extensions, tweaks and apps from Cydia.

After awhile, you can amass quite a few Cydia apps and packages, and it’s important to keep your purchases and downloads backed up for safe keeping. Whether it’s a jailbreak tweak you paid $2 for or a free one, you don’t want to lose what you find during your jailbreaking career.

Every several months a new jailbreak will come out for the latest version of iOS, and you’ll need to re-jailbreak your iOS device. Restoring to a stock version of iOS before jailbreaking removes all of your jailbreak apps and tweaks. In Cult of Mac’s ultimate roundup, we’ll show you the best ways to backup and restore your Cydia apps on your jailbroken iOS device. 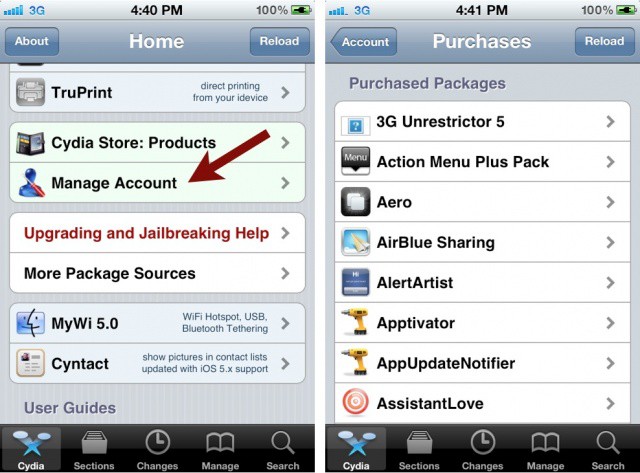 Like Apple’s App Store, Cydia keeps a record of the purchases you’ve made with your account. You can view your entire list of installable purchases by visiting the “Manage Accounts” window in Cydia. Login and tap “Installable Purchases.” All of the tweaks and apps you’ve bought with your Cydia account ID will be listed for you to install again, free of charge.

This is definitely the easiest way, but there’s a catch: Cydia only keeps record of paid jailbreak apps and tweaks, not free ones. If you’ve installed a free tweak, it won’t be in this list. But hey, it’s free. You can probably find it in Cydia again the next time you jailbreak.

Instead of using a backup app, some jailbreakers are content to use this feature in Cydia to retrieve purchased packages. Once you re-jailbreak and install Cydia on your iOS device again, you can login with your account and install everything you purchased previously. There’s always the slim change that a developer could pull a tweak or app from Cydia before you can download it again, in which case you wouldn’t be able to get it back without a local backup. If your Cydia account information is lost or changes, you’ll also lose access to this list of installable purchases. 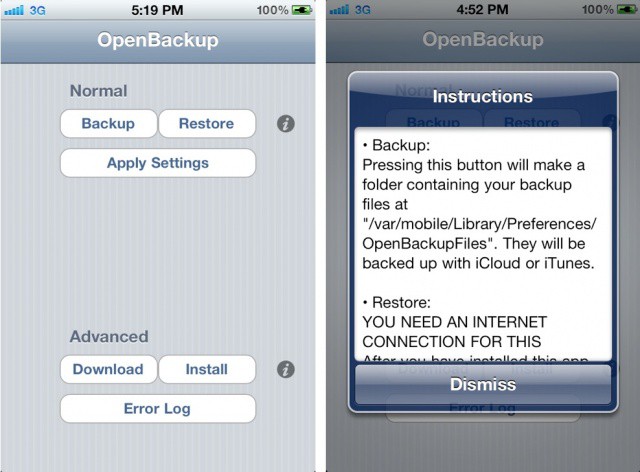 Once you tap “Backup,” OpenBackup will save all of your Cydia packages to your iPhone’s filesystem, thereby pushing them to either iCloud or iTunes via a sync cable connection. When you download a newer version of iOS and re-jailbreak your device, install OpenBackup again from Cydia. Tap “Restore,” and the app will retrieve your paid and free packages and install them for you. Read the app’s directions for more information. 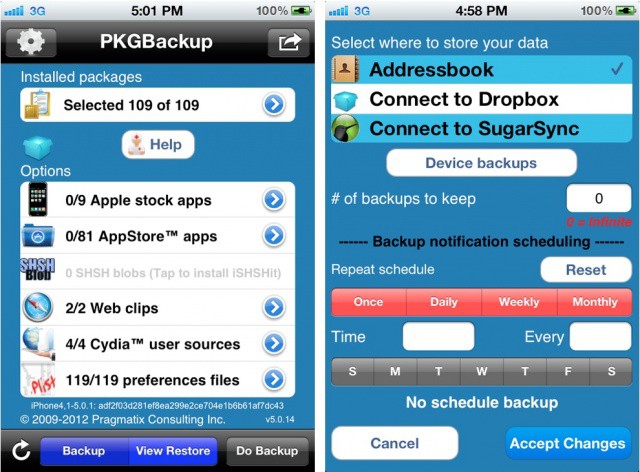 PKGBackup is the undisputed king of jailbreak backup apps in Cydia, but the downside is that it will cost you $8. For the serious jailbreaker, this app is definitely worth the price. PKGBackup isn’t the prettiest app around, but it works and boasts the most features.

You can choose from three ways to backup your apps and tweaks: saving the data locally in an address book contact, or storing it wirelessly with either Dropbox or SugarSync. There are lot of options to configure, including repeating backups.

PKGBackup will scan your jailbroken iOS device to determine what you need to back up, and the app will let you choose what types of files to save (preference files, Cydia sources, App Store apps, etc.). Once you have everything you want checked, backup to either the cloud or a contact. When you re-jailbreak and install PKGBackup from your list of installable purchases in Cydia, restore from your previous backup to get everything back to the way it was.

Saving to an address book contact is good if you keep your iOS device synced with your Mac and want a local backup, but Dropbox is the easiest. PKGBackup will create a folder in your Dropbox that it will automatically pull from when you need to restore. Easy as pie!

A cheaper alternative to PKGBackup is xBackup. Also available in Cydia, this $1.50 app is a little simpler at backing up apps and tweaks. xBackup saves everything from your app layout to individual app settings, making it a worthy competitor.

Causal jailbreakers shouldn’t have to really worry about manually backing up Cydia apps and tweaks. If you’re more of a power user, PKGBackup is the best option available to ensure that you don’t lose any purchases or settings on your jailbroken iOS device. xBackup is also a great alternative at a cheaper price.