A warehouse nestled in the heart of Louisville, Kentucky is home to hundreds of unnamed machines. Each white box gently wields a robotic arm that grips a normal-looking pen. As I walkdown the aisles separating the machines, disjointed sounds of clicks and squeaks fill the air. I’m in the home of Thank You Pen, a new startup that aims to blend technology with good, old-fashioned, dead-tree communication. “And while the service’s creator modestly says he can’t compete with Apple, Thank You Pen is doing what Cards can’t: putting love, care and soul into every card sent.”

With the Thank You Pen iPhone app, anyone can order a custom card to be delivered by the United States Postal Service. The catch is that each card looks like it was written by hand. Christopher Davis, the main guy behind the app, has been working on Thank You Pen for several months, and the app received a major update in the App Store last weekend. 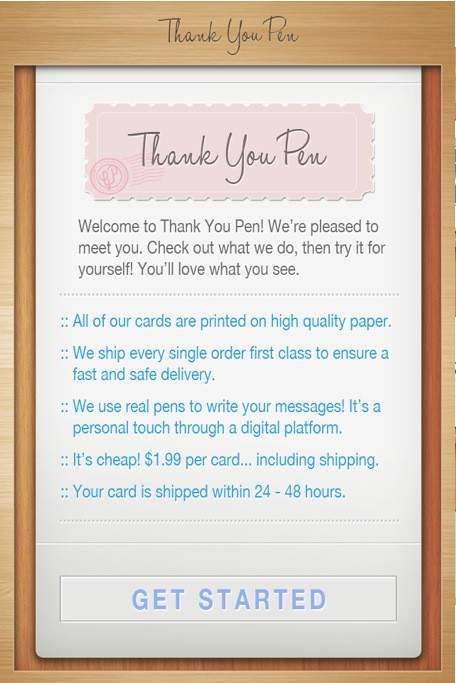 “The idea for Thank You Pen was to take something that people were already doing, but hated doing, and make it cheaper and faster. We also want to make it super personal. Having the handwritten look makes all the difference. All of a sudden it’s über-personal, and you’ve done it in under a minute from your iPhone.”

Unlike similar apps, the cards Thank You Pen makes look completely handwritten. Davis showed me a card up close and I would never have been able to guess that it was made by a machine. You can order a free sample card yourself and see; it really does look like someone took the time to sit there and write the card. That’s the magic.

“We live in a day and age where things are based off speed and convenience,” said Davis. “If it’s easy to do it and it doesn’t take a lot of time, then we’ll do it. Even if it’s a little more expensive than the alternative, we’ll do it. And it’s all because it’s easy and it’s quick.”

Thank You Pen has plenty of competition. Apple got in the card-making game when it released its Cards iPhone-only app in October of 2011 at the iPhone 4S media event. The app lets you choose a card on your iPhone, add a short message and photos from your Camera Roll, enter shipping info, and pay for the card with your Apple ID. Individual cards cost $3 to ship in the U.S. and $5 for international addresses.

Thank You Pen will ship first class in the U.S. for $2, and international shipping is planned for the next version.

“I’m not so worried about Cards, because I just can’t compete with Apple,” said Davis as we stopped to look at one of the patented writing machines Thank You Pen uses to fill orders. “They have more money and resources than I’ll ever have. I just have to be great at what I do.”

There are also 5 or 6 other apps in the App Store that are doing card deliveries already, but none of them match Thank You Pen’s level of personal charm. Any card or postcard app puts out computer-generated text. Thank You Pen adds a touch of humanity. When you’re ordering a card, you can choose to have to written in male or female font. Davis plans to eventually let business submit custom fonts, but custom fonts for everyone isn’t on the table right now. When it comes to developing Thank You Pen, Davis wants to keep simplicity at the forefront.

“You look at some of the other options in the App Store and they give you like 60 cards to choose from,” said Davis. “I want to offer 6 to 8 designs at the most. The whole idea is to make it fast. And if you have to think about what kind of card you want to send for a long time, that defeats the purpose. But I do have a lot of extra designs I can filter in and use to replace other cards.”

A huge Thank You Pen update will be dropping in a couple months. Davis is planning an iPad version and completely revamped workflow on the iPhone. Facebook and Instagram integration for adding photos to cards is coming, and there will be a public API for allowing other apps to integrate with Thank You Pen. Another universal app for sending postcards with photos from a Camera Roll on glossy stock paper is also in the works.

In the meanwhile, check out Thank You Pen in the App Store. Send a card to your mom and remind her that you love her.