Ever wished your Mac could look more like your iPhone? Well, according to this video and today’s tip, it can. Pull up a chair, the nearest Mac with OS X on it, and your downloading fingers. Here’s how you do it.

If you watched the almost two-year-old video, you’ll have noticed that the icon set mentioned was hosted on defunct file sharing site MegaUpload. We did a bit of searching around and updated the process so you could do the same thing, today. Aren’t we nice?

First up, let’s make our desktop background look like the default iPhone one, with a nice high resolution image of earth as seen from space. We did a search on Google for “earth mac wallpaper” and found the image we ultimately used in our screenshot above. Once downloaded, right click on your current desktop background and choose Change Desktop Background from the resulting contextual menu. The Desktop & Screensaver preference pane will show up. Simply drag the image you downloaded to the image well there.

Once your background uses the pretty earth from space picture, head over to the Panic website and grab a copy of CandyBar, a Mac app that lets you customize the icons on your Mac. Download the 14 day trial (the non-trial version is $29), and drag the CandyBar application from the resulting disk image to your Applications folder. Double click to launch it.

Then, go to the iconfacory site to grab the freeware icon set, Flurry. Click on the CandyBar iContainer icon to download another .dmg file, which will be called icontainer.dmg. Once downloaded, double click on it and then double click the Flurry System icon, which will cause it to open in CandyBar. 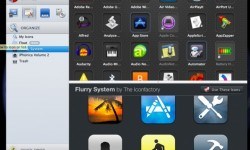 The next bit is kind of tricky, but we believe in you. Click on the little button in the upper left of the CandyBar window that says Change Application Icons in a tooltip when you hover the mouse over it. In addition, click on the Flurry System icons in the left hand pane. Then you’ll see two panes to the right, one with the current applications on your Mac and the other on the bottom with the new icons from the Flurry set. Click and drag the icons from the bottom pane to the icons you’d like to replace in the upper pane. When you’re done, hit the Apply Icons button, and type in your administrative password and allow CandyBar to restart your dock. The new icons will appear there. Hide or quit everything running and you should have something close to our screenshot above.