Sony has announced a pair of new cameras today. One is the A37, an “SLT” (like an SLR, but without the flipping mirror) and the other is the NEX F3, a new mirrorless model.

We have our full review ready and coming to your screens in a few hours (11:30 PST), but for a quick look at the details, read on. 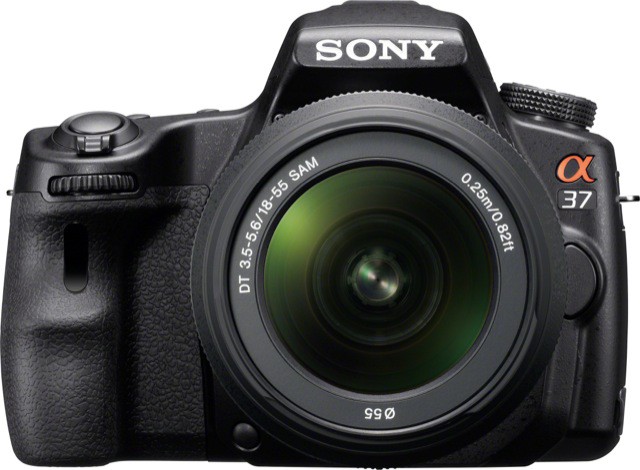 The new NEX is really just an evolution of the NEX-C3, and is quite a bit bigger. It gets the NEX 5-N’s 16MP sensor and a new built-in flash (useful for triggering bigger, off-camera flashes if nothing else). And it also gets a neat flip-up LCD which will auto-rotate the image so that you can use it to shoot self-portraits.

It also lacks a charger. Instead, you can charge the batteries via USB. Other specs include a maximum ISO of 16,000, 1080i video (and stereo mic) and a weird auto-framing portrait mode, which detects faces and crops the image place the subject according to the rule of thirds, guaranteeing all your pictures look the same. The NEX F3 will sell for $600 when it launches in June.

The A37 is interesting for what it brings at the low, low price of $600. The SLR-style camera has a 16MP sensor and Sony’s transparent fixed mirror tech, which lets the camera do full-time live-view as well as letting you look through the optical viewfinder. It also means no mirror-slap, which means less vibration, which means sharper images at slower shutter speeds.