Titles like Angry Birds, Tiny Wings, and Jetpack Joyride have proven that popular smartphone games are big business for developers. But why are we so addicted to gaming on our mobile devices? Well, according to a new survey from MocoSpace, a third of us do it just to kill time and cure boredom, while 10% of us do it to meet new people.

MocoSpace, a site where gamers can discover new games and connect with other players, has announced the results of the “Y U Play?” survey conducted on its network of more than 25 million users. The results have revealed that the most popular reason for playing games on a mobile phone — as chosen by 34% of the 10,000 respondents — is that the games are fun.

That’s hardly a surprise when you think about it, but some of the other answers were very interesting. Nearly a third (32%) of respondents revealed they play mobile games simply to kill time and cure their boredom, while 10% said they play because they like to compete.

9%, rather surprisingly, revealed they play mobile games to meet new people, while 6% play just to try something new. My favorite response was from 3% of the respondents who said they play mobile games “to flirt.” I’m not really sure how you seduce a girl over a game of Words With Friends, but the idea that someone would try is amusing. 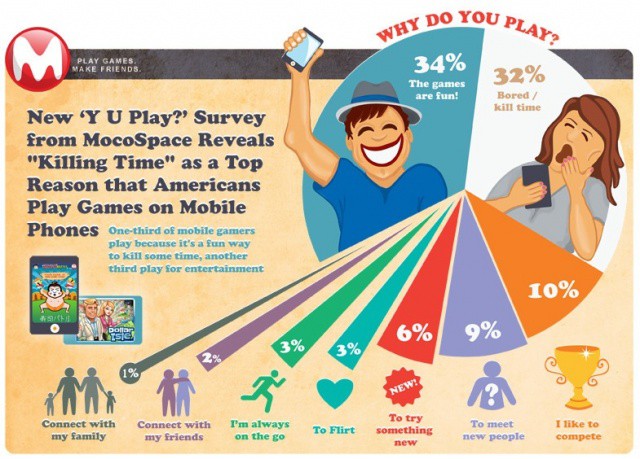 One of the most surprising results is that only 2% of mobile gamers play to connect with their friends, which seems like an incredibly low figure to me. When I play games online on my iOS devices, it’s almost always to compete with a friend.

The survey also revealed that 31% of respondents are using mobile phones to cure boredom in the class room.

“This survey showed us that our gamers are really engaged with the titles we are offering,” said MocoSpace co-founder and CEO Justin Siegel. “We are working on developing more games in-house as well as fostering relationships with third-party developers in order to churn out more fun HTML5 games that can be played on any mobile device.”

Why do you play games on your mobile phone?