As a rule, I don’t like thick folio-style iPad cases, and especially not ones that zip closed. So when I spied the Spigen Zipack in a consignment of cases that arrived some weeks ago, I put it on the bottom of the “to review” pile and ignored it.

However, it turns out that the Zipack’s combination of weird features, featherlight weight and decent amount of protection is a winning one. As there will likely be many folio-haters like me out there who would pass over this case on principal, I thought I’d give it a chance to be seen.

The Zipack is light, thin but padded, and covered in faux leather on the outside and soft, nuzzling microfiber on the inside. A smooth zipper closes it up, making it a perfect package to toss into a backpack or airline carry-on.

After that, though, things take a turn for the odd. Odd enough that I can;t work out if they are good or bad design decisions. This, I’m going to skip the normal good/bad review format and just tell you about these weirdnesses.

When in normal use — reading, say — the iPad is held in only by two corner straps, both of which are on one side (the left side, if you have the case open like a regular book). Obviously, these don’t hold the iPad securely, and if you were to forget and hold the case only, the iPad would slip out in a second. It makes me wonder why the straps are even there. 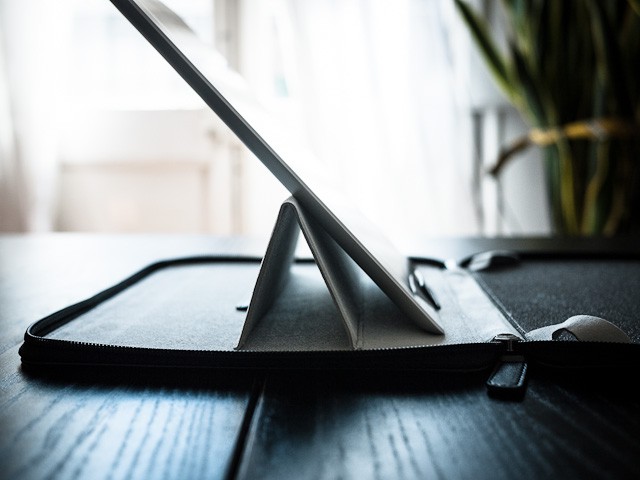 Then we get to the stand part. Many folio cases double as stands for typing and movie watching, and the Zipack is no exception. What is different is the way it does this:

That’s it. It looks goofy, and maybe it is. But it also lets you use the iPad in vertical and horizontal orientations, and if you fold the rear cover underneath it makes a pretty sturdy stand even on a soft surface. Right now I’m tying this on a Bluetooth keyboard into my iPad, which is propped up vertically on my knees. 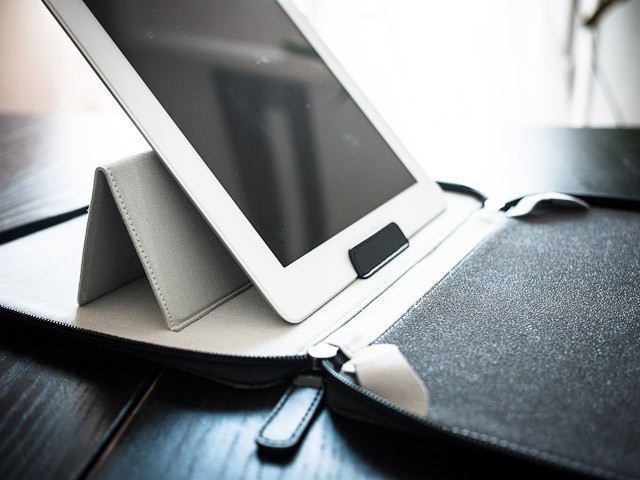 And if you want to type on the screen instead, the soft stand is non-slip enough that you can just prop the iPad up on it and tap away on the screen. Kinda. If you do it the way it’s done in the photos on the packaging, the iPad will slide off the stand. You need to come at it from the other side and tuck the bottom edge of the iPad into the surrounding zipper.

Like I said: The whole thing is super weird, but the strange design does have one big advantage. It keeps the weight down. This is the slimmest and lightest (266 grams or six ounces) folio case I have ever used.

There is one thing that I would call out as actually bad, though: The lack of a magnet. Like some of the other Spigen cases I have tested, this one has no sleep/wake magnet in the cover. Come on, people — this is 2012 already.

I probably wouldn’t drop the $59 asking price on this case, mostly because I’d be scared of my iPad falling out every time I opened it. But if you treat it as a carrying case with a few extra gimmicks, you might be happy. And as such, I’m going to give it two star ratings. You should read the first one if you believe that all of these odd design decisions are in fact sensible and deliberate:

And you should read the second one if you think that the designers at Spigen just got drunk in the factory one Friday and, like, totally made the dumbest case they could: