Back in 1985, Big Blue (IBM) was the big bad competition for Apple. So, of course the sales team at Apple, including Steve Jobs, decided to make a video. It being the mid-eighties, the theme obviously had to be the hit of the season, Ghostbusters.

Craig Elliot, a former Apple employee, revealed the video in an interview with Bloomberg’s Emily Chang. Apparently, the video is part of Elliot’s collection of Jobs memorabilia, and includes this film, created by Apple employees for a sales conference in which IBM’s Big Blue is cast as the antagonist and IBM sales representatives as the scary ghosts. The Apple sales team, then, are the BlueBusters, strapping Apple II computers onto their backs and shooting plasma bolts at the ghastly IBM’ers. 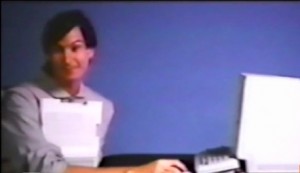 While it seems a bit cheesy by todays standards, I’m sure this was a pretty strong tactic to take in the button down world of business computing, with Apple taking a teasing stance against the then-current computing giant. Let’s just hope they didn’t get a bunch of Big Blue slime all over them as a result.

This all comes on the heels of the audio published at Fast Company in which Steve Jobs compares co-founding Apple to being the parent of someone like, say, Jeffrey Dahmer. Looks like the Steve played things fast and loose back then, adding to his already considerable legend.