Star Trek creator Gene Roddenberry owned the first Mac Plus, and it’s about to be auctioned off next month.

Roddenberry’s Mac Plus will join one of Michael Jackson’s gloves in an auction on October 8-9 by Profiles in History, an auctioneer of Hollywood memorabilia.

Roddenberry created Star Trek in 1964 as an intergalactic cowboy saga, a “Wagon Train to the Stars.”

The Mac Plus originally retailed for about $2,600. The iconic beige computer was the third model in the Mac product line, introduced two years after the original Mac and its successor, the beefed-up 512K. It featured such breakthrough technology as double-density floppies (remember them — 800KB instead of a measly 400?), an astonishing 4MB or RAM and an external hard drive via its external SCSI port. I had one with an 80MB drive if I recall.

The Mac Plus was featured in the best Star Trek movie in the series: the highly entertaining Star Trek IV: The Voyage Home (1986). Having traveled back in time, chief engineer Scotty tries to talk to a Mac Plus, but obviously it doesn’t respond. Told to use the mouse, he picks it up and speaks into it like a microphone. Classic.

Roddenberry’s Mac was the first off the line at Apple’s automated Mac factory in Fremont, California. Built by Steve Jobs, the factory was judged as a disaster: Apple never produced enough Macs to justify its enormous investment. Nonetheless, the Mac Plus was one of the longest-lived Macs. Apple continued to make them until 1990.

Roddenberry’s computer includes the original keyboard and mouse, an external floppy drive and an Apple-logo carrying case. It will be accompanied by a signed letter of authenticity from Roddenberry’s son, Rod (yeah, Rod Roddenberry).

More pix and the purple prose press release from Profile in History after the jump.

UPDATE 1: The auctioneer made a couple of goofs in its press release. the machine did belong to Gene Roddenberry, but it’s not a real Mac Plus. It’s a Mac 128K that was upgraded to a Mac Plus — hence the discrepancy between the picture and the serial number. According to spokesman Marc Kruskol: “The conflict between the photo and the serial number is as follows. This computer, given by Apple to Mr. Roddenberry, is an early production Macintosh 128 (#776), which was then upgraded by Apple for Gene to a Macintosh Plus-thus the model number / serial number / panel that “belongs to” a Macintosh Plus. The 0001 led us to mistakenly believe that it was the first one off the line.”

As a journalist who covered the Apple annual meeting the day Steve Jobs introduced the original Mac–and bought one that day; and as Roddenberry’s biographer who, coincidentally, wrote the book on, yes, my then aging Mac Plus, I can assure you that Mac Pluses did NOT come with 4 megs of ram or anything close.  My recollection (and I still have my Plus in the garage, so I can go check) is that they came standard with 512K.  Moreover, they absolutely did not ship with external hard drives (by the way, my recollection is that the first built-in hd came with the SE).  In 1990, I bought my first external hard drive, which held a then colossal 40 megs, for $700.  As late as 1994, Power PC’s came standard with 8 megs of ram, and an additional 8 would set you back hundreds.

One last thing: It’s highly unlikely that Roddenberry himself used the Plus.  Why?  Because in those days, about the only thing they were good for was word processing…and he’d already stopped writing.  Besides, none of the papers in his archive pertaining either to ST or the NG appear to have been created on either MacWrite or M Word.  The Roddenberry family, led by the late widow, is notorious for suddenly “discovering” lost creations by the Great Bird of the Galaxy when, in fact, they were likely commissioned post mortem.  The Great Bird did that frequently when alive, too; he paid others to write scripts that he put his name on.

Thanks for the trip down memory lane. 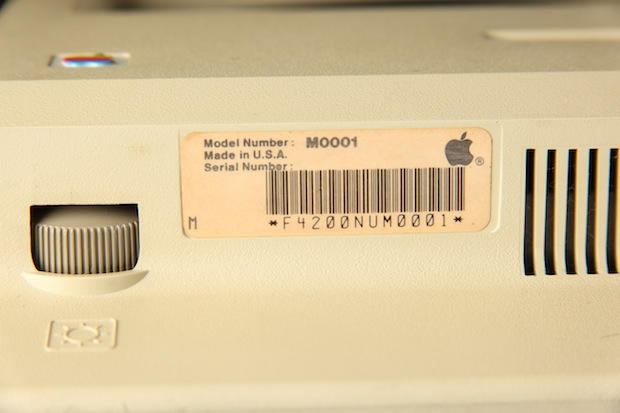 PROFILES IN HISTORY TO OFFER THE FIRST APPLE MACINTOSH PLUS, SERIAL NUMBER 0001, GIVEN TO
GENE RODDENBERRY BY APPLE COMPUTER

Iconic Technological Artifact Will Be Part of Their Huge October 8-9, 2009 Auction

Calabasas, CA, September 17, 2009- Profiles in History, the world’s leading auctioneer of Hollywood memorabilia, will be offering the first Apple Macintosh Plus computer, given to Gene Roddenberry by Apple Computer, Inc.  Bearing the serial number F4200NUM0001, this wonderful association between the visionary computer designer/manufacturer and legendary Star Trek creator is a stellar example of the powerful synergy between technology and entertainment. This amazing artifact, which is accompanied by a signed letter of provenance from Gene Roddenberry’s son, Rod, will be a special addition to Profiles in History’s October 8-9, 2009 auction of Hollywood memorabilia. It has an estimated sale price of $800-$1200.

“This is the personification of life imitating art. Gene Roddenberry’s vision inspired countless people to pursue careers in science and aerospace.  This milestone computer, given to Gene by Apple’s innovators, is a symbol of this synergy,” said Joe Maddalena, president of Profiles in History.

Already announced as part of the same auction are Michael Jackson’s iconic illuminating white glove that he wore on the Victory tour as well as the original cover art from The Jacksons “Victory” album.

This is the very first Macintosh Plus 1Mb personal computer to come off the assembly line at Apple Computer in Fresno, California.  It was presented to Gene Roddenberry as a gift by Apple Computer, Inc. and bears the serial number F4200NUM0001.  The Macintosh Plus was a revelation among personal computers when it came on the market in 1986. With 1 Mb RAM (upgradeable to 4Mb), it supported the double-sided floppy disk format and was the first Mac with a SCSI port for fast data transfer to and from an external hard drive.  The Macintosh was the first mass produced computer to utilize the mouse and the Macintosh Plus was the longest-lived Macintosh with production until 1990.  It features the beige-colored case with 9 in. display, 3.5 in. floppy drive and includes the short keyboard, external floppy drive, mouse and Apple logo deluxe padded carrying case.  An incredible artifact with a wonderful association between the visionary computer designer/manufacturer and legendary Star Trek creator.  Accompanied by a signed letter of provenance from Gene Roddenberry’s son, Rod.  For more information about Profiles in History and to download complete catalogs from previous auctions, please visit HYPERLINK “https://www.profilesinhistory.com/” \o “https://www.profilesinhistory.com/”www.profilesinhistory.com.