Many of us are dreaming of a liquidmetal casing for the next iPhone which will sport a tapered, teardrop design that will help make the sixth-generation device thinner than its predecessor. However, a SIM tray that is believed to be destined for the new device suggests it could feature a box-like design similar to the iPhone 4S.

The tray comes from parts vendor SW-BOX.com, which posted a message to Twitter (first noticed by Cydiablog) that read:

We got the iPhone 5 sim card tray holder slot from a supplier. Hmm…

However, to us, it looks almost identical to the SIM tray for both the iPhone 4 and the iPhone 4S. That means that if this really is an iPhone 5 component, the new device may not sport an all-new, teardrop design after all.

The SIM tray’s straight edge indicates that whichever device it is destined for will sport flat, box-like sides like Apple’s last two iPhones. For an iPhone with tapered edges, we’d expect to see a SIM tray with a slightly rounded egde, like that featured in the iPhone 3G and iPhone 3GS. 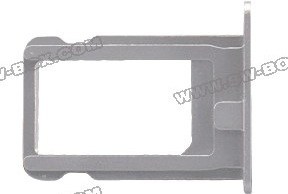 Another thing this SIM tray tells us is that the new device may not feature the miniature nano-SIM card that Apple has been developing. However, the technology is yet to win the approval of many competitors, so it’s not really surprising that it won’t be a feature of the next iPhone.

It is widely believed that the new iPhone will make its debut this October, around 12 months after the launch of the iPhone 4S. The majority of iPhone users are hoping for a significant redesign this time around after Apple chose to stick with the same look for the last two devices.