When Apple introduced the MacBook Air without an optical drive, everyone freaked out. “How on earth will we be able to watch all of our DVDs and listen to our CDs?” cried the internet. And sure, totally disowning physical media with a disk drive-less laptop may have been a little preemptive of Apple back in 2008, but the times have changed since then. We live in a world of digital media and digital software distribution. The success of services like Netflix and the Mac App Store proves that.

With rumors saying that Apple will introduce new and improved Macs in the coming weeks, what can we expect? Faster processors? Solid-state hard drives? Retina displays? While these features certainly seem to be on the table, there’s also the chance that Apple’s next-gen MacBook Pro will sport significant physical changes. Namely, we could finally see the optical drive retire from the MacBook line once and for all.

The MacBook Pro’s physical design has basically stayed the same since its aluminum unibody design was introduced way back in 2008. There hasn’t needed to be new a design because the current one is already fantastic — no other laptop has yet to match it in terms of build quality or design precision.

Apple introduced the new and improved MacBook Air with a gorgeous, tapered, ultra-thin exterior in October of 2010. The sleek, lightweight design of the MacBook Air is widely considered to be the future of Apple’s MacBook line. Heck, Apple even calls it the “future of the notebook” on its website. Call me crazy, but that sounds like foreshadowing.

The current Air weighs only 2.38 pounds, and the casing is only about half an inch thick. This engineering feat is accomplished with the help of Apple’s decision to ditch the optical drive out of the gate. You have to buy an exterior SuperDrive to read disks on the Air. And who really uses their SuperDrive that often? I know I don’t remember when I used mine last.

Believe it or not, the optical drive still takes up a lot of space in the current MacBook Pro. That space could be used so much more usefully. An interesting Reddit thread on the possibility of an optical drive-less Pro includes a rough image illustration: 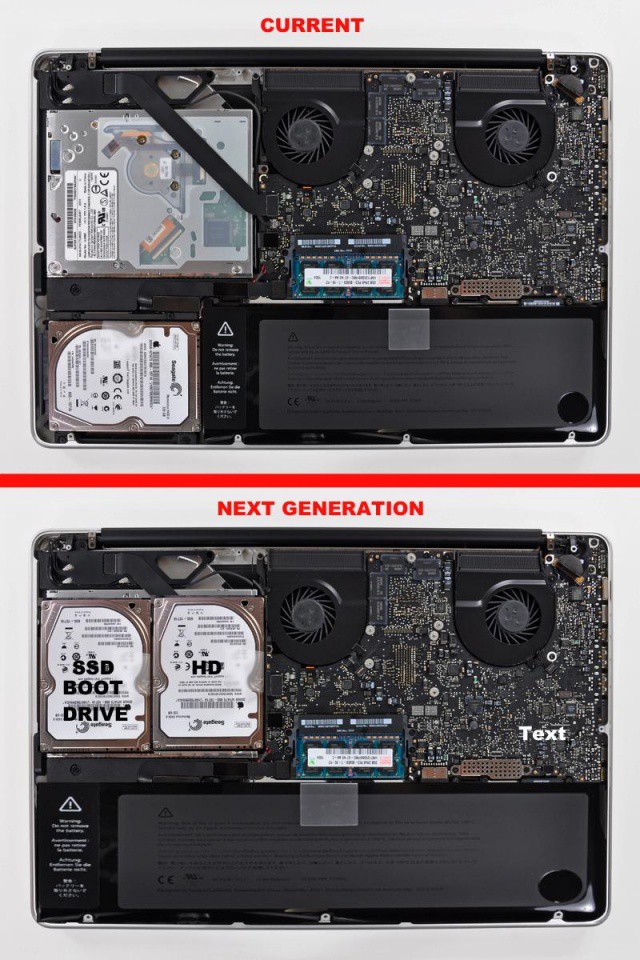 Reddit user “ramin987” explains what he expects to happen:

Honestly, I don’t see Apple making them into the Air-like wedge shape that everyone seems to think. I believe they’ll just take advantage of all that extra room they inherit if they pursue to get rid of the optical drive. The battery will be about 30% bigger, meaning an even more impressive battery life; and having just a small capacity SSD for just the OS will keep costs down.

Apple would have to use exponentially more-powerful GPUs to fuel the graphics for a Retina display MacBook, not to mention the battery life that would be needed to power such a screen’s insane resolution. The third-gen iPad is made up of mostly battery to power its 9.7-inch Retina display. Imagine that scenario replicated on a 15-inch laptop screen. A bigger battery will definitely be needed. Why not get rid of the optical drive in the MacBook Pro and use the space for a larger battery?

I can see Apple going a few different ways here. There’s more than just the battery angle. Sold-state (SSD) drives are the future of computing (they’re the type of drives that are already in your iPhone and iPad). Apple gives you the option to buy a MacBook Pro with a SSD already, but the prices are ridiculously expensive and storage size is very limited. SSDs have become way cheaper of the past couple years, and many computer makers are already transitioning away from the classic, platter-based hard drives. SSDs are lighting fast and much smaller than hard disks. There’s no reason the next MacBook Pro shouldn’t ship with a SSD.

Without an optical drive, a traditional hard drive could even be paired alongside a solid-state drive. The SSD would boot OS X and the regular hard drive would be used for file storage. You could even choose to have two SSDs instead of a heterogeneous setup. This customization would appease the ‘pro’ users and also help move the MacBook line towards a more unified experience.

It certainly makes sense for Apple to leave the optical drive in the dust this year. Expect even the iMac to do the same in the future.