Never mind what Steve Jobs tells the New York Times, the iPod Touch is getting a camera, likely sooner than later.

The new iPod Touch has an internal space for a camera, a teardown by iFixit has discovered. And there’s a couple more surprises also.

iFixit has just dismantled the new Touch, and found a space between the Touch’s WiFi chip and antenna that measures 6mm by 6mm by 3mm.

“It appears that Apple left room for a camera in the top of the device,” said iFixit CEO Kyle Wiens. “There isn’t enough depth for an iPhone-style autofocus still camera, but just enough room for the camera that Apple used in the 5th generation iPod nano.”

The camera in the 5G nano measures only 2.75 mm thick. It records video at the relatively low VGA resolution (640 x 480), but cannot take still pictures.

Wiens said his technicians couldn’t find a connector on the Touch’s circuit board for a camera cable, but Apple is likely to also update the internal circuits when it adds the camera.

The exclusion of a camera in the touch is a real puzzle because there was more evidence than normal to support the rumor. Pictures of prototypes were published, and dozens of case manufacturers were leaked the specs of the camera, which was put in a new position — the center of the back, rather than being offset like the iPhone before it.

* The touch has hardware for 802.11n high-speed WiFi. “This is a big deal, as even the iPhone 3GS doesn’t support 802.11n,” says Wiens. The software may not yet support 802.11, just as earlier Touch models had hardware for Bluetooth that wasn’t turned on until Apple released the 3.0 OS update.

* The 802.11n is part of a new Broadcom BCM4329 chip, which also supports FM transmission. If Apple adds an antenna and software support, the iPod could stream audio to car FM radios. “But that’s a lot of ifs,” says Wiens.

Wiens concludes: “While we were all disappointed by Apple’s underwhelming iPod touch announcement, it is clear that there is more engineering effort under the surface of this device than meets the eye.” 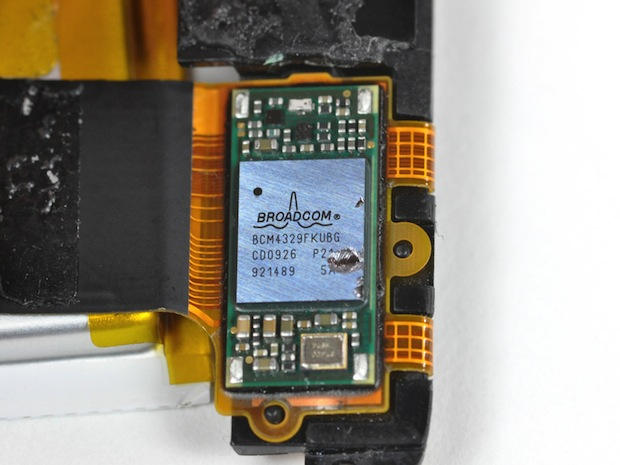