Whispers have been circulating for months about Apple releasing a larger iPhone later this year. Since the original iPhone launch, Apple has kept the iPhone’s essential dimensions intact, and we still have the same 3.5-inch display size Steve Jobs demoed at Macworld in 2007. While the rest of the smartphone industry has been experimenting with all kinds of crazy screen sizes and aspect ratios, Apple has stuck with a simple 3:2 aspect ratio and 3.5 inches.

There have been plenty of arguments made for why Apple will release a 4-inch iPhone in the future, but one smart forum user has put together an argument that trumps the rest.

Over at The Verge’s forums, “modilwar” presents a very compelling case for why he thinks the next iPhone will have a 4-inch display. He starts by mentioning the obvious problem that LTE radios have caused for device size — you need a bigger device to house a bigger battery to fuel power-hunger LTE circuitry. Case in point: the LTE variant of the new iPad is 0.6 millimeters thicker and 0.11 pounds heavier than its older counterpart. Modilwar argues that Apple won’t want to increase the physical footprint of the sixth-gen iPhone — no matter how slightly — so that would leave LTE on the cutting room floor. In his mind, Apple would need to increase the iPhone’s overall size, and thus the screen size, to accommodate LTE networking. 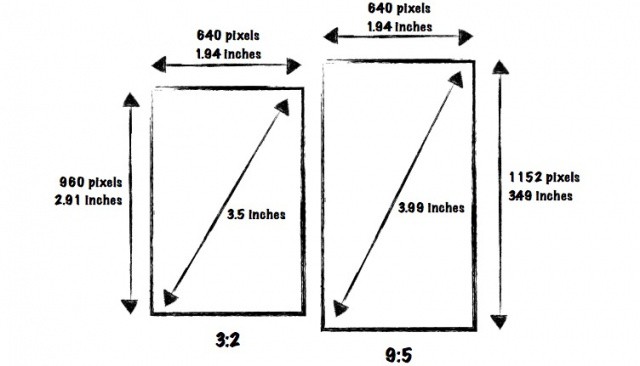 Modilwar’s curiosity was sparked when another reader of The Verge named Colin recently suggested how Apple could make a 4-inch device without losing the iPhone’s general form factor or pixel density:

Colin’s idea was to keep the shorter side of the iPhones screen the same, i.e. 640 pixels at 1.94 inches. With that in mind how much would the longer side need to increase so the that diagonal measurement was 4 inches. The answer, derived using simple algebraic rearrangement of Pythagorus’s theorem, 1152 pixels and 3.49 inches. That leaves the the diagonal length measuring a little over 3.99 inches, I’m sure Apple PR could round this 4.

Modilwar continues his presentation with mockups of how Apple’s stock apps would look at the new aspect ratio. He notes that there are some instances where the new dimensions wouldn’t work as well. For example, game devs would need to rebuild certain UI elements for a 4-inch display with a 9:5 ratio. However, video playback would actually leave room for less black space around the edges of the video frame, creating a better experience than what the current iPhone displays.

Admittedly, it’s a pretty brilliant solution to what’s been making the rest of the tech industry scratch its head for the last few months. A trick like Modilwar and Colin explain would be something smart enough to come from Apple itself. Well-connected Apple pundit John Gruber chimed in saying, “Methinks “Colin” wasn’t merely guessing or idly speculating.” Sounds like we may have found the key to a 4-inch iPhone.