The first iPad was debuted by Steve Jobs to thunderous applause on March 12, 2010. Many media pundits criticized the tablet for its ridiculous name and called it a huge flop. Fast forward two years later, and we couldn’t imagine a world without the iPad. It has shaped what Apple has dubbed the “post-PC era.”

Over 50 million iPads have been sold to date, and Apple just sold 3 million third-generation iPads over launch weekend. Most tablet manufacturers dream of selling 3 million units in a year, but analysts estimate that Apple will sell an upwards of 66 million iPads in 2012 alone. That is an absolutely astounding figure. 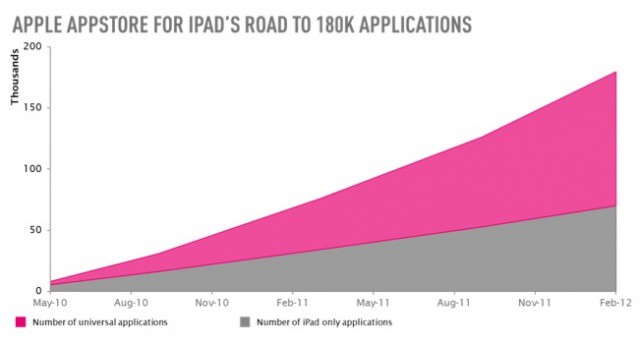 There are over 180,000 apps for the iPad in the App Store. Comparatively, Distimo concludes that the iPad App Store is basically on the same growth pace as the iPhone. The App Store had 200,000 iPhone apps available after two years. Universal apps that run on both the iPhone and iPad have grown from representing 33% of the App Store in May of 2010 to over 61% this year. As you can tell from the graph, universal apps still account for a very large part of the iPad’s App Store footprint, indicating that developers prefer to package their apps for the iPad and iPhone together into one download.

The iPad App Store is the second largest mobile app marketplace in existence, trailing behind the iPhone. Unsurprisingly, Google Play (formerly the Android Market) comes in third, although only 32,000 Android apps have been optimized for tablets.

Not only does the iPad boast the largest app store, but it also features the most expensive store, according to Distimo. In-app purchases, a feature Apple introduced for the App Store in February of last year, are now implemented in 10% of all iPad apps. 6% of all iPhone apps feature in-app purchases. iPad owners spend $70,000 per day in iOS 5’s Newsstand for subscription-based content from publishers.

When we look at the top 200 top grossing applications in each of those stores 74%, 80% and 56% of the applications feature in-app purchases in the Apple App Store for iPad, the Apple App Store for iPhone and Google Play, respectively. This means that regardless of the proportion of applications that feature in-app purchase, the model is adopted by the majority of the top grossing applications in each store. Therefore, for many developers it is a serious backdrop that other app stores like Windows Phone 7 Marketplace do not (yet) support in-app purchases, as these figures have proven it to be a successful business model for developers. 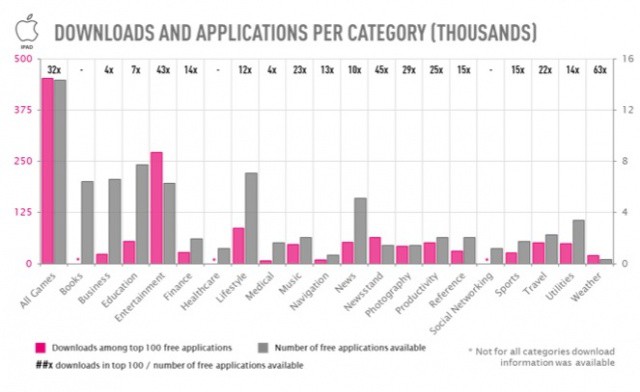 The most popular App Store categories on the iPad continue to be Games (50% of all top paid apps are games) and Entertainment. Interestingly, weather apps have become pretty popular on the iPad, as they are downloaded the most. More specific categories like Business and Medical contain more paid apps and less downloads. 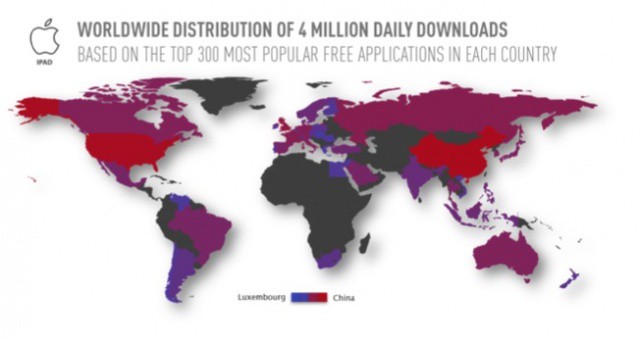 Interestingly, downloads in the U.S during February 2012 dropped significantly while China’s interest in apps continues to skyrocket. To be clear, the U.S. is still the top grossing country for iPad apps, but more free app downloads are coming out of China now. Distimo says that developers should consider marketing paid apps or in-app purchases to countries like the U.S., United Kingdom, Australia, and Canada.

To conclude, Distimo has complied a list of the highest ranked all time app publishers for the iPad. It’s no surprise that Apple sits on top with apps like Pages from the iWork suite: 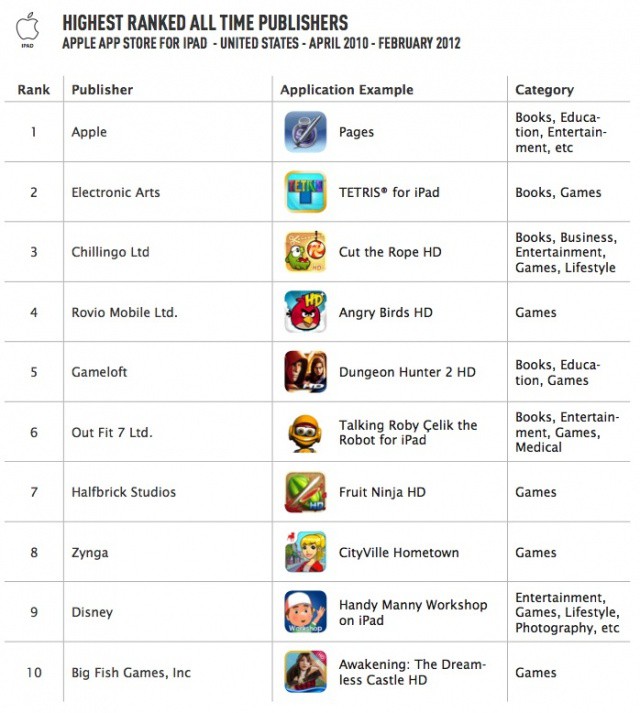