The revamped Spaceship Earth ride at Disney’s Epcot Center has a special “Steve Jobs section,” according to the lifthill blog, which tracks news about rides and roller coasters, and was invited to a special preview.

But once at the Steve Jobs area, which is supposed to depict the birth of Apple computer in a garage, the lifthill blogger noticed that the lone figure in the garage looked a lot more like Wozniak than Jobs.

The figure is facing the wrong way, so it’s hard to tell, but it’s wearing the same shirt as Wozniak in a famous early photograph copied below, and has similar hair and beard. Conspriacy theorists note that Jobs is the single largest shareholder in Disney– but I can’t believe he cares that a section of Epcot bears his name or likeness (or not).

Anyway, there’s no second figure in sight, so one of them is slighted. And so too is the third Apple-founder, Ron Wayne, but no one cares about that.

But what is that thing the dummy Woz/Jobs is sitting in front of? It ain’t no Apple I or II — the first and only machines Woz created more or less single-handed. It looks like a big wooden Mac, but none of the Mac prototypes looked like that — they were much more finished. 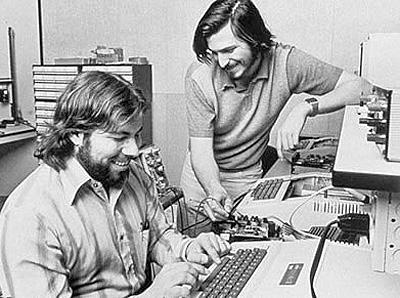 Apple
Number of comments on this postLeave a comment

21 responses to “Is Disney Trying to Reinvent Apple History at Epcot?”