The more I play with Snow Leopard, the more it looks like it’s designed to run Apple’s upcoming tablet.

Look at Expose in the Dock — the new feature that reveals all an application’s open windows when you click and hold the application’s icon. It’s tailor-made for fingers. Even more convincing is Stacks in the Dock. Hit a folder icon in the dock, and up pops the folder and all its files. Each icon is a big target for your finger, and the window has a big, fat slider for scrolling up and down (no more fiddly little arrows at the top or bottom). Both of these UI tweaks scream ‘touchscreen.’

And then today I discovered an unheralded feature that the minute I saw it, I thought, “Game over! Here’s rock-solid proof that Snow Leopard is designed for touchscreens. This is a tablet operating system.”

The Mac OS has long contained a virtual keyboard, but previous versions were half-sized (see below). The old virtual keyboard was clearly not designed for actual typing, and was hidden away in the “International” tab of System Preferences. (Yeah, the keyboard could be enlarged by hitting the green button in the upper left of the folder toolbar, but still, it expanded to only three-quarter size).

The new virtual keyboard in Snow Leopard now lives under “Keyboard” in System Preferences, and is clearly put there as an alternative input method.

The virtual keyboard can be made as big as your screen — 30-inches wide, if you have a big Cinema Display — by dragging the window resizer at bottom left.

Of course, it can’t be used as a real virtual keyboard until Apple introduces a touchscreen device. At the moment, it just records the keystrokes on your physical keyboard and shows the characters that will be typed when the Option key is held down, and so on.

Yeah, I know, this isn’t proof that Snow Leopard is designed for a touchscreen device — IE. the tablet everyone knows Apple is working on — but I got pretty excited when I saw it. It looks like a key touchscreen UI element to me.

Here’s how to see it yourself:

For comparison, here’s the old soft keyboard in Leopard. This is not a touchscreen keyboard. 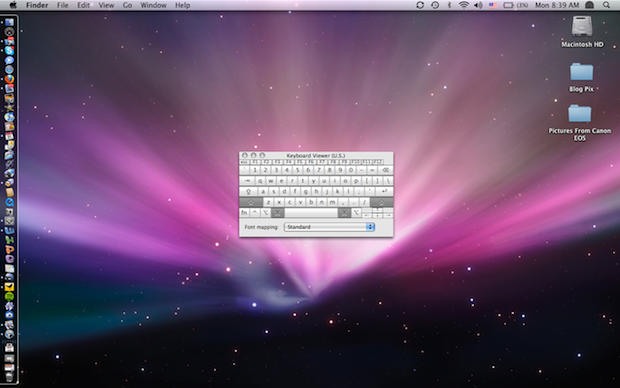