iOS devices are big business in China, and not just for Apple. Gangs of scalpers queue up to get their hands on the latest devices on launch day so that they can later be sold on through the grey market for a sizable profit.

Back in October, when the iPhone 4S launched in Hong Kong, police were called to break up the riots that occurred outside of Apple retail stores as scalpers attempted to force their way into the lines ahead of genuine customers. To ensure it doesn’t happen again, Apple has warned scalpers not to queue up for its new iPad on Friday.

The company has left notices outside of its flagship store in the IFC Mall in Hong Kong, telling customers that the new iPad will not be sold on a first-come, first-served basis. It reads:

No staying or queueing up here. Apple will not serve on a first come first serve basis for new iPad. Please refer to Apple’s official website for the detailed arrangement.

Following the trouble Apple had with its iPhone 4S launch in China, it introduced a reservation system that means Chinese customers must first place their orders online, then pick up the device in-store, with a government-issued photo ID, when they receive confirmation that their item is available. The service will go live for the new iPad from Thursday morning.

However, neither the system nor the notices are deterring hopeful iPad customers. The lines continue to build ahead of Friday’s launch, with Engadget China reporting that scalpers are camped out outside of the IFC Mall despite warnings from the police demanding that they move on. 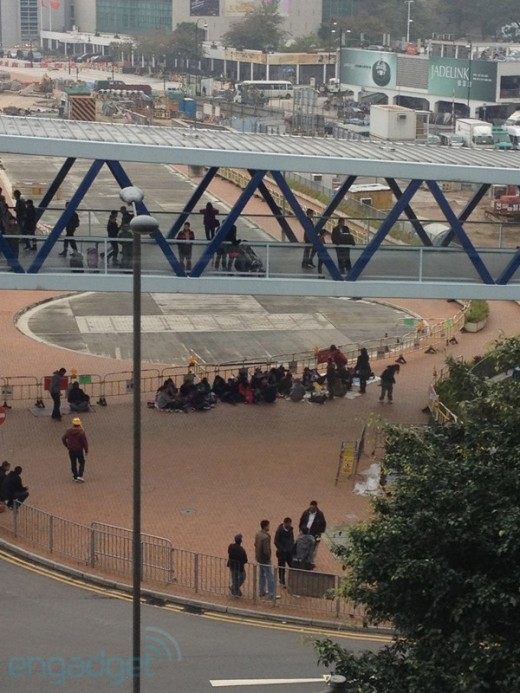 They won’t be able to walk into the store and purchase the device, but it is believed that they will be there to offer genuine customers inflated sums of money to hand over their new iPad.