Along with everything else in iLife for iOS (and iWork too), iMovie got an update at the new iPad announcement on Wednesday. The big new feature is trailers, which you may have used before on the desktop. Now you can make them on iPhones (4 or later) and iPads (2 or later).

We wanted to put the new iMovie through its paces, so here’s a trailer we made.

If you are used to iMovie on your Mac, the iOS version is very similar.

When you’re making a trailer, you’re given a storyboard template into which you slot footage roughly matching the instructions given. It doesn’t take long to put something together, especially if you’ve been out all day shooting with friends or at an event.

On our test iPad 2, it worked just fine. The only sign that it was eating up system resources was the slow, jagged animation when we rotated the pad through 180 degrees. While normally the screen flips everything around in a moment, here it was visibly slower. 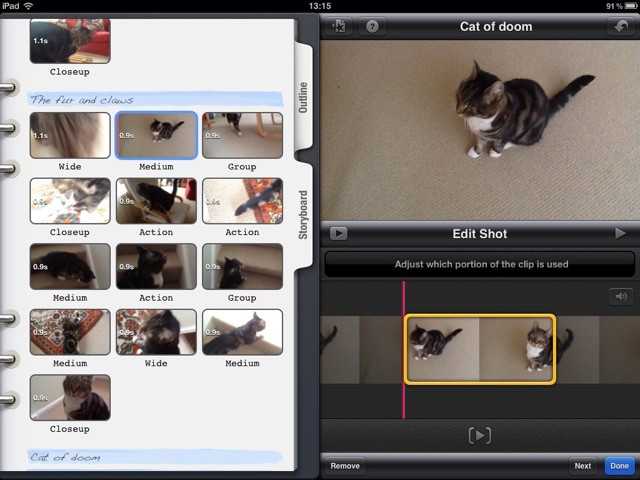 The supplied trailer templates are great, and give you a variety of genres to play with. It was nice to see Bollywood in there, but wait, no sci-fi epic? 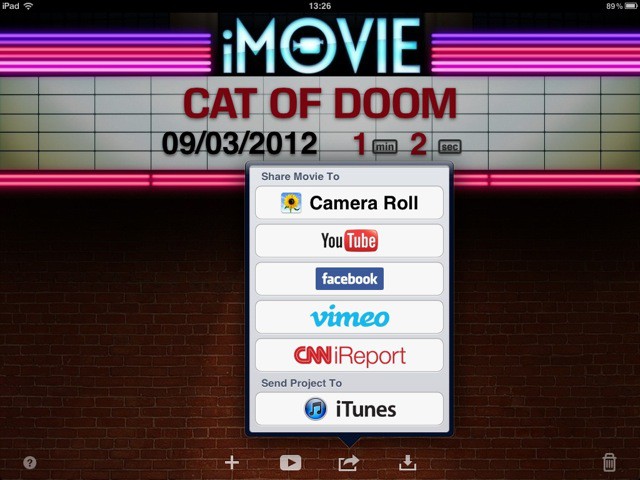 Trailers are fun to mess around with, no doubt about that. But ultimately they’re just a video toy. For your five dollars you get a cool portable video editing app, totally worth the money. The trailers are a nice extra.

This release is optimized for the new iPad, which comes with a better camera. Having just shot Cat of Doom on my iPad 2, I’m reminded that using an iPad as a camera is still as awkward as it’s always been. I can’t see that getting any better in the new iPad, better camera or not.

Con: Trailers are a bit gimmicky.