A new report from Forrester makes it clear that IT departments and the users that they support are not on the same page when it comes to employees using their own devices in the workplace. In fact, according to Forrester’s survey of both IT staffers and knowledge workers illustrates that IT may be largely out of touch with how many users are bringing their own iPads, iPhones, and other mobile devices and how many devices each employee is bringing to the workplace.

This adds an interesting counterpoint to the study that we profiled early today that indicated that by and large IT departments are beginning to embrace BYOD and other parts of the consumerization of IT trend.

The Forrester study, which surveyed over 10,000 information workers and 2300 IT decision makers offers a handful of important important points.

Looking at platforms used in the workplace only 63% were Microsoft devices (PCs and Windows Phone). Of the rest, 12% were Apple products (both Macs and iOS devices like the iPhone and iPad) with 7% being Android devices and 5 percent being BlackBerries.

The study also looked at the frequency with which employees selected and/or paid for devices that they used in the workplace. Not surprisingly many employees (57%) chose and paid for their own smartphones and data plans. The numbers were similar for tablets (48%). 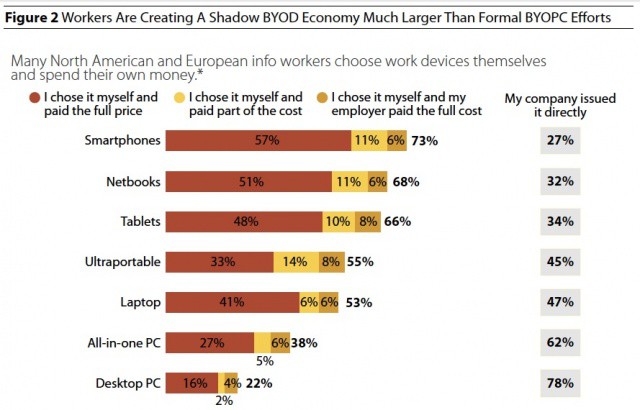 Perhaps the biggest number from this survey is that only six percent of companies in the survey had established BYOD programs. That means that a significant number of employees are flying under the radar with their own devices. Put another way, IT is not aware of the extent of personal devices in use despite efforts to embrace the BYOD model.

The big lesson here is actually not about how many iPhones, iPads, Android phones, Macs, or any other devices that workers are bringing into the office. The real lesson is that, as IT departments begin to embrace the consumerization and BYOD trends, IT staff need to be more involved with staff in every department. That’s the only way to be able to keep abreast of how much outside technology is being used and how it is being used. With the information and the building of trust, IT staff can begin to educate users on security risks and other challenges. That will also mean that IT begin to effectively support user needs that are clearly not being met by existing technology if users are going around IT to such an extent.