UPDATE 3: The iPhone email issue looks like a real bug and not a settings issue after all. CoM reader Paul Taylor ran through the procedure described below, and all the email he ever deleted on his iPhone is still there going all the way back to the iPhone’s purchase in 2007. Says Paul:

I read your post ” Update x2…..” with interest because I was appalled to discover this problem in mid June and reported it to Apple after having no success correcting it (nor did three Apple ‘Geniuses’ one of whom was characterized by his peers as “The iPhone Genius — if he can’t fix it no one can.” He couldn’t).  I sent it off to Walt Mossberg on August 3rd to see what his efforts might produce but have seen nothing to date.

I had performed all the exercises described in your post (after doing thorough searches of all mailboxes on my Mac Pro and my ISP server to be sure the particular emails were NOT there.

BTW – with regard to the ‘Remove’ settings, ALL deleted emails back to the purchase of my original iPhone in 2007 were still there, so the day / week / month settings are immaterial, at least in my case. The problem apparently has always been present, the new search feature merely exposed it.

The only relief (not fix) I have found so far, has been to first make sure unwanted emails have been stripped from all mailboxes, then do a “Restore” on iTunes.  The relief is short lived — the ’emails that wouldn’t die’ are gone, but all email deleted following the restore begins to collect anew.

UPDATE: The iPhone email bug that caused such a fuss yesterday is not a bug but a configuration issue, says knowledgeable CoM reader Dr. Harry K. Zink.

If you properly delete your emails, this does not happen – i.e. remove the email from both SENT and INBOX, after which you need to go into the TRASH folder, and manually select the messages, and select DELETE again. This applies to IMAP, ActiveSync and MobileMe accounts. POP accounts are affected by this, but only because they are configured to retain deleted mail for a period set in ‘settings’ for that account — if you set it to one day, and wait 36 hours, the messages are also gone.

This is a function of the way IMAP and especially POP mail leave mail in the Deleted Items folder, or Trash folder, for the duration specified in the settings — it seems most users never bothered looking in their settings (the default is to keep deleted messages for a month before they auto-delete – you can also set it to a day, or manually delete instantly).

Furthermore, this does *not* apply to ActiveSync accounts, where a deletion is instant and complete (thus corporate kids can stop the sweating and heavy breathing – Apple’s got your back), and neither on MobileMe accounts (you know, Exchange for the Rest of Us). On IMAP accounts, if you manually delete it from the trash, the messages are gone as well. It’s POP accounts which have this issue.

So for the most part this is being blown terribly out of proportion – not by the original guy who discovered this, but by all ruminants and regurgitators, particularly those who are too lazy to properly investigate something like this.

To change the “Remove” settings for POP accounts:
1. Go to Settings>Mail, Contacts, Calendars
2. Select the account you want to modify
3. Go to >Advanced. Under the “Deleted Messages” heading, you’ll see the “Remove” setting. Choices are: after a day, a week, one month or never.
Screenshots after the jump.

Apple is aware of the iPhone email bug CoM first reported yesterday and will likely issue a fix in iPhone 3.1, the next major update of the iPhone/iPod OS.

“An internal tipster has provided us with proof that Apple is fully aware of this issue and will probably be including a fix in iPhone OS 3.1,” says Gizmodo.

Meanwhile, it appears the bug is limited to POP email accounts, not IMAP accounts. It is probably a Spotlight caching issue. Spotlight on the iPhone/iPod creates local copies of emails, which aren’t deleted when the originals are.

There seems to be several ways to fix the bug. Sometimes, simply waiting works; the message cache is eventually cleared. It’s also possible to erase the cached messages by loading and reloading them several times, according to Richard from 148Apps.

Instructions for configuring your iPhone POP accounts to delete email after jump:


To change the “Remove” settings for POP accounts:
1. Go to Settings>Mail, Contacts, Calendars
2. Select the account you want to modify
3. Go to >Advanced. Under the “Deleted Messages” heading, you’ll see the “Remove” setting. Choices are: after a day, a week, one month or never. 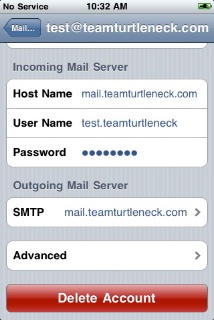 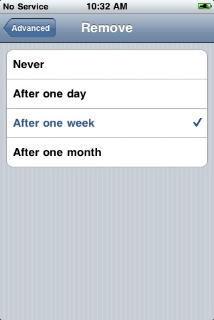 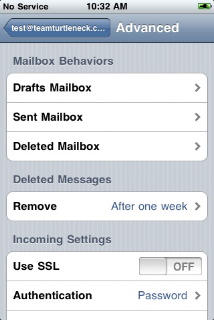