When Apple announced iMessage for iOS 5 last summer we were excited to finally have a universal messaging app that sought to free our cellphones from the slavery of wireless carrier texting plans. Today with the announcement of Messages for OS X it looks like Apple is serious about creating a messaging service that supplants texting and chat services by providing a one size fits all solution that works well on every screen. The new Messages app is pretty awesome and it’s a needed step forward that finally unifies iChat, iMessage, and Facetime, but it is not without its flaws.


Using Messages feels natural for anyone who owns an iPhone/iPad running iOS 5.0 or above. It works just like iMessage in that you select a contact’s phone number or email address, type your message, hit enter and send it to their device. However, there are a few quirks that I’ve discovered so far.

For instance: Emjoi are immensely popular with iPhone users, but OS X Message can’t send emoji. Instead of emoji, Messages has 28 different emoticons, but if you send an emoticon to an iPhone they don’t get the little picture, they just see “:-)” instead of a smiley face image. But if an iOS user sends an emoji to a Messages user the Messages user can see the Emoji. It’s kind of weird how that works out and Apple should just scrap the emoticons and just use Emoji on both Messages and iMessages. 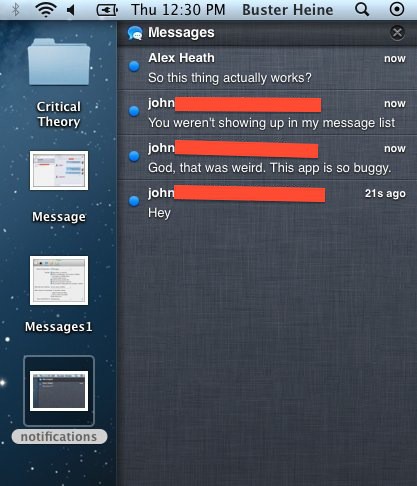 Messages also includes the ability to FaceTime with contacts. Simply click the FaceTime button in the upper-right hand corner of a chat conversation and the FaceTime app will launch and start a new video feed with your friend. A couple other nice features about Messages is the ability to send files to other users, set auto-reply messages, and change notification sounds and backgrounds like users are used to doing in iChat. Chat transcripts are saved to the iChats folder, but if you close out a conversation thread and then start a new one with the same person the previous transcript isn’t automatically loaded into the thread to make it appear seamless a la Facebook Chat. 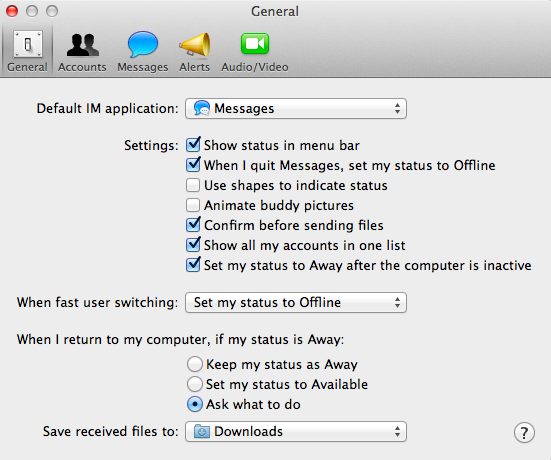 Overall, OS X Messages looks to be a very promising app. Apple has managed to combine iChat, iMessage, and FaceTime into one easy to use app that connects users anywhere in the world no matter what type of Apple device they’re using. There are quite a few bugs and inconsistencies that need to be worked out before the “beta” tag can be removed from the app, but once those fixes are made we think Apple’s Messages platform will be the future of chatting.