The latest update to Alfred adds a selection of smart new features, one of which is a new way of grabbing selected text from any Mac app and pushing it straight into one of your other Alfred actions – such as a web search, for example.

It’s a cool little feature but a little hard to find, so here’s how to set it up. You’ll need to have paid for the Alfred Powerpack to make it work.

In Alfred’s preferences, go to Hotkeys and click the little plus symbol at the bottom-right. In the list that appears, click General, then Show Alfred (as shown above).

Now you’ll be able to configure an alternative way of invoking the Alfred command window. 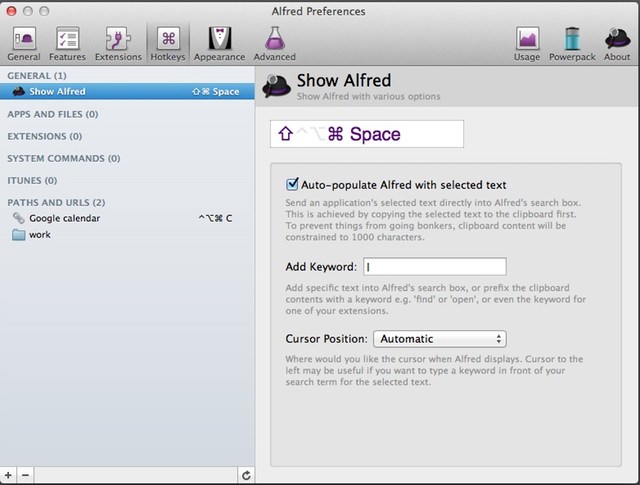 At the top, you can choose a keyboard combo. I usually call up Alfred with Command+Space, so for this alternative I’ve set up Shift+Command+Space.

This grabs whatever text I’ve selected and puts it into Alfred. The other options below the key combo setting allow you to add a keyword in front – in my case, I’ve used the letter ‘l’, which is already set up inside Alfred as a shortcut to Google’s “I’m Feeling Lucky”.

Result? I can select text anywhere, hit four keys in rapid succession, and see the top Google result. (Which, despite Google’s flaws in other areas, is still almost always the one I want.)

Got any useful Alfred tips or shortcuts of your own? Share them in the comments.