Apple’s education event in New York City this morning may see the launch of a new version of the company’s Pages word processor which will feature support for iBooks publishing, and an iBooks application that will allow us to read our favorite titles on our Macs. Furthermore, we could also see the launch of textbook rentals. 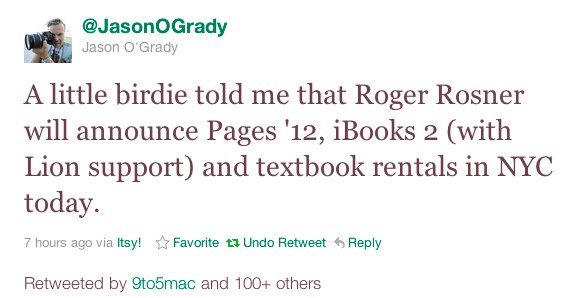 It is rumored that Apple is working to make it easier for authors to publish their content as e-books, and so the ability to launch content from directly within iBooks certainly sounds plausible. Alongside Pages ’12, we could also see iBooks 2 that won’t just support iOS device, but also Macs as well. The new version of iBooks will reportedly support textbook rentals, allowing students to borrow the content they need for their studies. O’Grady is treating the rumor as pure speculation at this point, so we’ll have to wait and see what Apple’s event brings this morning. We’ll be live-blogging the whole event so be sure to stay tuned!