My colleagues here at Cult of Mac, PR reps completely unrelated to Fuji or anything photographic, random showgoers whose snippets of conversation I intercepted — everyone seemed to be talking about it. Even the very air at CES seemed to be pulsating with the word “Fuji.” Of course, they were all talking about the enigmatic, neo-retro Fuji X-Pro1.

This camera isn’t for everyone. This is the prototypical enthusiast gadget, not really a daily driver. It’s a Shelby Cobra, not a Honda Accord; in other words, it’s stylish, difficult to live with, a blast to drive — and expensive.

How expensive? Fuji isn’t sure, but they told me it’ll probably be around $2000 — and that’s just for the body. Eek! Then again, the X-Pro1 is stacked with some deliriously cool features:

It’s a compact mirrorless camera that uses interchangeable lenses, like the Micro Four Thirds system outfits such as Olympus and Panasonic use; but unlike the smaller sensor of the Four Thirds, the Fuji has a larger APS-C sensor the same size as those used in prosumer Nikon DSLRs (Canon uses a very similar version).

Everything’s wrapped in a body designed to look and feel something like those old Leicas; even the three lenses available are all equipped with manually operated aperture rings that move around the lens barrel (in 1/3 stops) with nice, satisfying clicks.

The rangefinder-style viewfinder has a neat twist: it can digitally superimpose all the shooting data you could ever want over the real live view, including a dynamic level indicator and parallax lines. But it’s a hybrid: With the flick of a switch, it can also display a simulated electronic view that lets you see what the captured image will look like as you apply changes to it; exposure, depth of field, white balance can all be adjusted and simulated before the photo is taken.

And here’s where it gets really interesting. The Fuji Pro-X 1 can also simulate styles of different films (remember those?) and take images with several levels of dynamic range — essentially capturing an image with a wider range of exposure, a similar (but less powerful) effect to that achieved with HDR software. And all if this can be previewed with in the electronic viewfinder.

But only three lenses will be initially available for the X-Pro1, a 35mm f/1.4, a 60mm f/2.4 and an 18mm f/2 (equivalent respectively to 52.5mm, 90mm and 27mm on a full-frame body). That’s not nearly a large enough selection to make this a practical shooter right off the bat. If Fuji ramps up the accessory options (and maybe lowers the price a bit), we could be looking at the first mirrorless to entice pros to make (a little) room in their gig bags for. 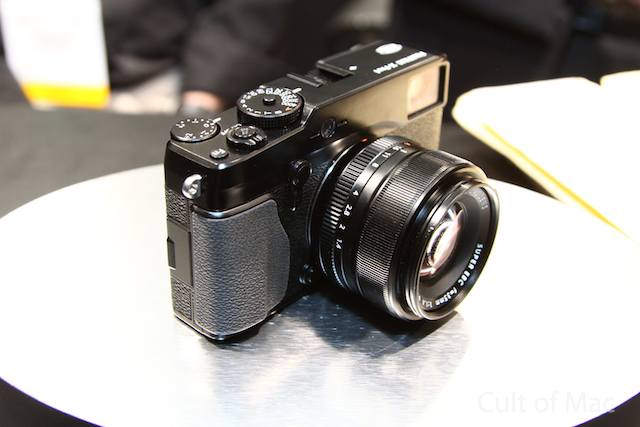