LAS VEGAS, CES 2012 — One trend we weren’t expecting to see at CES was the enormous amount of ultra-portable speakers every company is trying to sell. The type that look like a soda can cut in half that pops up to reveal a speaker that has the magical “unparalleled sound quality” all their makers brag about. For over twenty years Behringer has produced professional audio products, but have only recently decided to enter the consumer space. So what does a high-quality audio company do to make themselves stand out in a market saturated with mediocre speaker products? Make a really really nice ultra-portable speaker? WRONG! They go and create the biggest iPod Dock ever that makes those minature docks look miserably insignificant.

The iNuke Boom is one of 50 Behringer audio products made for consumers that are hitting the market this year. We had seen pictures of the iNuke before, but we were left speechless as the sweet bassy tones washed over our faces when we approached the iPod Station in real life. It’s like seeing the Keebler elves – you can’t believe they exist. The iNuke Boom is a mythological audio device that isn’t just big, it’s freaking massive. You could have a dance party on top of this thing.

It’s fitting that the we were introduced to the iNuke Boom in Las Vegas – a post-modernist city of fractured dreamscapes where life is all about playing rather than the search for meaning. The iNuke Boom is what Vegas is all about. It’s a tongue in-cheek joke poking fun at a tech industry that is obsessed with one-uping each other by making their next products bigger and louder. It’s like Beringer is saying, “Ok, you want to talk about how big your sound is, well we’re going to cause a supernova with our audiostation just to show how ridiculous everyone is.” The point comes across savagely loud, and creates room for the company’s 49 other consumer audio products to be noticed.

Berhinger insists that the iNuke Boom is a real product that they are actually selling. For $29,999, a Berhinger rep will come to your house, help you decide the best place to display your iPod dock, then deliver the 700lb behemoth to your front door and get everything set up. The only input port for the iNuke Boom is a 30-pin iPod connector on the top of the device (and no, a free iPod is not included in your $30k purchase). The front of the dock emits over 10,000 watts of sound, while the back is nothing more than a flat black backing plate that contains a simple volume control knob, power button, and an “iNuke Mode” switch.

We asked Berhinger how many speakers they have under the hood but they were wont to tell us other than saying they’re using “at least 2 18inch subwoofers” and a nuclear ton of speakers. Production starts soon and units should be shipped out in Q2 of 2012. The company claims they’ve actually received a lot of interest from home owners as well as restaurant and club owners.

Is the iNuke Boom ridiculous? Absolutely. But it’s also fun and completely cognizant of its audacity, which is something we commend even if we don’t feel comfortable dropping fat stacks of cash on a monstrous beast. 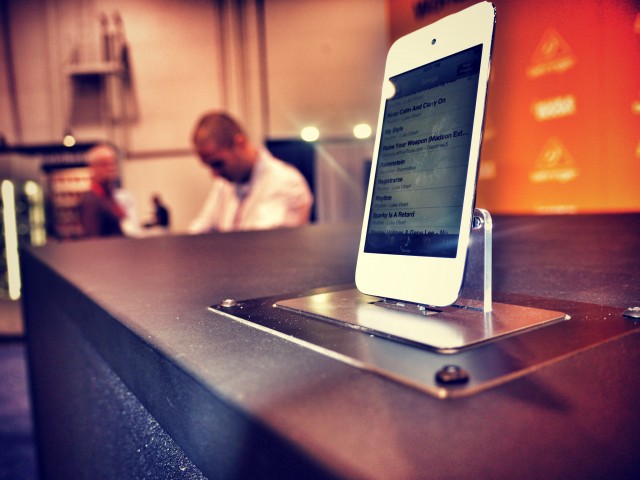 A simple iPod Dock is the only feature on the top of the iNuke Boom. 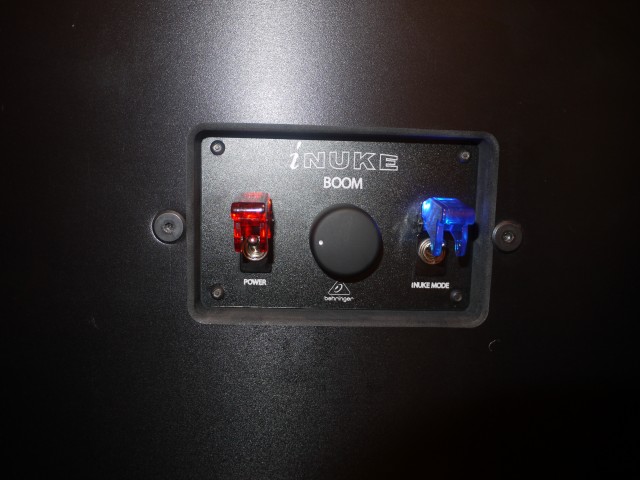 The back of the iNuke Boom