Cordell Ratzlaff is the man who designed OS Xâ€™s interface for Steve Jobs.

Back in 1997, just after Jobs had returned to the ailing company, he saw some mockups for a new operating system interface Ratzlaff and his designers had cooked up.

Jobs was so impressed, he said it was the â€œfirst sign of double-digit intelligenceâ€ heâ€™d seen since returning to Apple â€“ Jobsâ€™s idea of a complement.

At the time, computer interfaces were dark and gloomy. They were boxy, with hard corners, square windows and gloomy, grey colors. Apple was working on the first iMac, the worldâ€™s first fruity-colored computer that had a unique teardrop shape and lots of rounded corners.

Taking the iMac as their cue, Ratzlaff and his designers cooked up an interface to complement it. The result was â€œAqua,â€ an interface inspired by water, as its name suggests, which was bright and blue, with plenty of droplets, translucent menus and reflection effects.

â€œWe made the buttons on the screen look so good you’ll want to lick them,â€ said Jobs when introducing it at Macworld.

Launching later this summer, Kapitall attempts to make investing simple and fun by blending elements of gaming with traditional investing â€“ plus a Mac-like, drag-and-drop interface.

â€œCordell has taken a complex and tedious subject â€“ investing — and applied the sleek and easy Mac user interface to make it exciting and interesting,â€ said Kapitall spokeswoman Victoria Alexander.

The heart of the app — currently in private beat, but you can sign up — is an interactive workspace called “The Playground,” which is populated with the companies you are watching or investing in.

After seeing a demo, CNetâ€™s Josh Lowensohn said: â€œIt seems like a total data overload at first, but Ratzlaff managed to create and organize portfolios as if he were moving around picture files on a desktop PC. It actually looked kind of fun.â€

Click through the screenshots to see how it works. 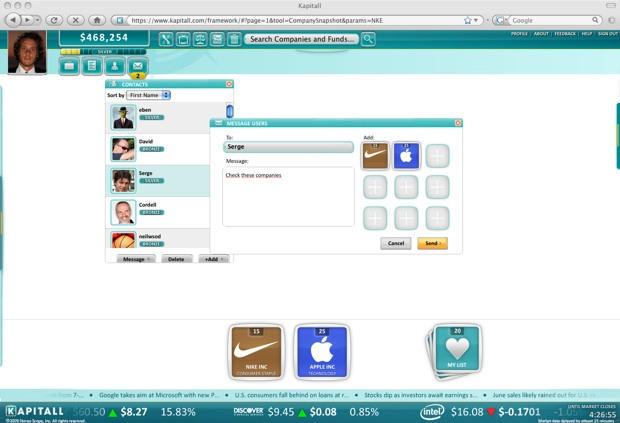 The Playground is an interactive, customizable workspace that investors can use to organize their investments. The drag and drop functionality makes it easy to access and compare sets of data.