Do you really need to spend a lot of money to get grade-A photo-editing tricks? Apparently not. With Snapheal ($20), developer MacPhun has taken arguably the coolest Photoshop feature in recent years, made it dead-easy to use and packaged it with all the basic photo-editing tools you’ll need — and more. And all for a fraction of what it should cost.

In the medieval days of the digital darkroom, erasing an unwanted element in a photograph was painful and time-consuming; you had to either painstakingly select the annoying element, then fill the selection, or use the clone and stamp tools to methodically erase it. Photoshop CS5 changed all that with its content-aware healing tools, and that tech filtered down into Photoshop Elements, beginning with Photoshop Elemets 9.

Snapheal, which arrived this Wednesday at the Mac App Store and is really built around this one feature, works very similarly to the spot heal tool in PSE9; the user simply highlights the unwanted element with the dedicated healing brush, picks one of three options and clicks the “Erase” button to set things in motion. Questions is, do the results stack up favorably against Adobe’s powerful editors? Yes — and surprisingly well.

In fact, most of our tests showed results on-par or even better than with what we could achieve using the Adobe apps (though note that we’re not using the most recent version of Photoshop Elements, PSE10). Snapheal seemed especially adept at removing large elements from a uniformly smooth or mottled background, producing results that made it extremely difficult to tell there was anything there in the first place. Take a look at the examples below to get an idea of the results we were able to get.

Snapheal puts the spot-healing function front and center. It’s the first menu tab option, and the massive buttons are hard to miss. Actually, the whole interface, across all the tools, is about as clean and uncluttered as it gets. As our Alex Heath says, it’s not pretty — but it’s simple and remarkably easy to work with.

The spot-healing tool (under the Erase tab) is a good example of this. Just four buttons (Select, Deselect and Pan and Clear Selection) allow control of the selection process; four more buttons — three choices of algorithm type, one for launching the process — and a brush diameter slider round out the palette. That’s it.

The three spot-heal algorithm options were all fairly well suited to their tasks: removing large objects, Shapeshift removing small imperfections (like skin blemishes) and Twister for repeating elements; although having said that, Wormhole generally seemed to produce the best results in the widest variety of situations.

Aside from the main feature Snapheal comes with all the digital darkroom staples like cropping, contrast, color-shift and sharpening. But there’re also some welcome surprises:There’s an effective de-noise slider; a clone-and-stamp palette for more precise erasing; and a Retouch palette that’s really a simplified set of masking features.

Super-easy opening and sharing of completed images through email or social media platforms rounds out a phenomenally simple-to-use photo-editing package.

If the app looks good to you, pick it up now — it’s on sale for $10 during its launch sale.

Of course, going the simple route means that many options for fine tuning stuff will be absent — there’s no way to select brush shapes or adjust curves. And there are no filters. The biggest hole is a missing tool for editing levels, an odd omission, even for a pared-down editing app (heck, even Apple’s Preview, standard on every Mac, lets you edit levels).

Getting around the screen can be a little bit clunky at times, because using a trackpad to move around, like in Photoshop, isn’t possible — instead, trackpad actions simply result in zooming in or out of the image.

The perfect app for anyone who wants to make good-looking edits simply, cheaply, and in the least amount of time; the app grandpa should use for quickly editing images to send to the rest of the family. 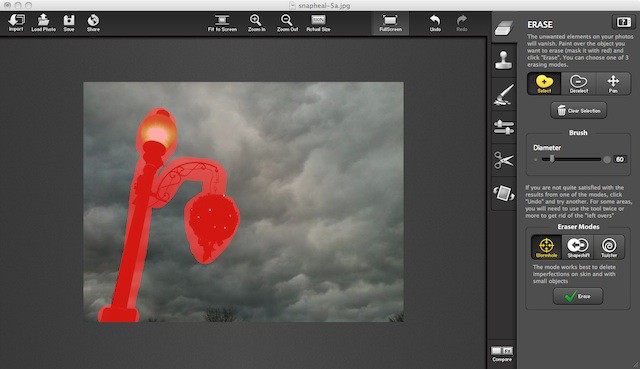