Artist David Datuna created a striking portrait of Steve Jobs titled “Viewpoint of Millions.” Shown at the recent international art fair Scope Miami, it became one of the most expensive art pieces sold at the fair, fetching $210,000.

It was created from a background pattern of thousands of miniature images of author/philosopher Ayn Rand; the large format iconic portrait rests under a wall of optical lenses made from nearly 80,000 parts. 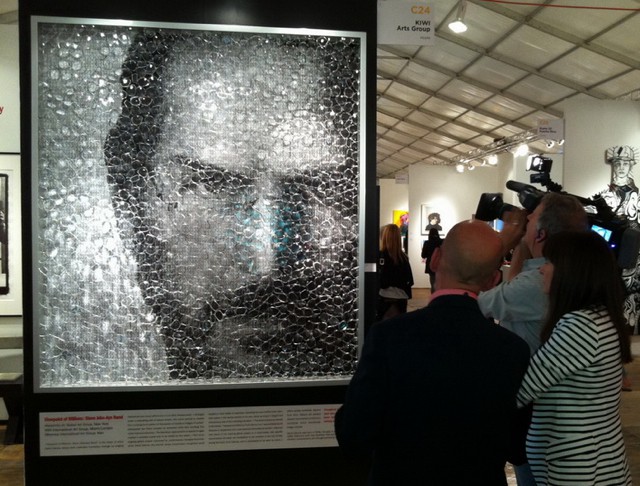 Moved by Steve Jobs’ recent passing, Datuna chose Ayn Rand as the “driving component of the portrait,” since her work is believed to have inspired the late Apple co-founder.

“Despite armies of loyal fans around the globe, many consider Jobs and his ‘empire’ an embodiment of corporate evil that has befallen the modern society,” Datuna said in a statement.  “Such polarity of viewpoints is conveyed through the combined use of positive and negative optical lenses. The artist avoids casting judgment on Steve Jobs and his personality. By only using the penetrating gaze of the subject of his artwork, Datuna tries to get to the very soul of Steve Jobs and reveal his motivations in life. ”

When I spotted the work last week on Kristen Philipkoski‘s blog, Stylenik, my first impression was: you kinda had to be there.

In person, it’s easy to see how both the miniscule portraits of Rand comprising Jobs and the overall effect with the glass lenses over the top could be thought provoking. From the glare-challenged screen of my MacBook Pro, not so much.

From the fan-designed homage in Post-it notes to the creepy bronze statue being cast in Budapest, there are a ton of portraits of Jobs speaking to the impact of his recent death.

Which ones do you think he would have appreciated?