News aggregators designed to give you maximum reading pleasure on the iPad’s 9-inch screen are scaling down for iPhones. Case in point: Zite just launched a version providing all the news that’s fit to scroll on your iPhone. 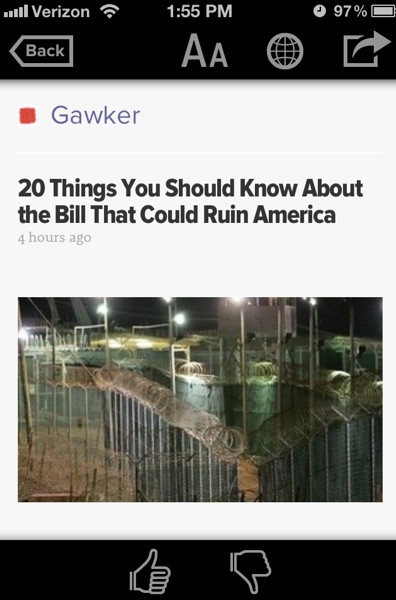 Zite, acquired by CNN in August, promises that the same secret sauce it uses to personalize your reading will follow you from the iPad to the free iPhone version and so will your profile. The app learns from whether you “like” by giving thumbs-up or down to Melanie Amaro Shares Her Love For Mariah On Twitter  or actually read that Foreign Policy editorial on Trickle-Down Economics what to serve up to you. Competitor Flipboard, named one of the top news apps in iTunes Rewind, also just released a pocket-sized version for iPhones (That we loved, by the way, here’s the full review). In terms of sizing up the pinch-and-zoom competition, Zite CEO Mark Johnson is nonplussed. He said via email he’s “excited” that Flipboard “has dipped its toes into personalization.” Ahem.

Personalization aside, other newsreaders like Trove, Pulse and News 360 are so multiplatform it’s old news. News 360, for example, can serve up reading material on the Phone/iPad, Android, Windows Phone 7, Playbook, a desktop app and via web. And then there’s Google, which just jumped into the newsreader Fray with Currents (Choosing Cult of Mac and Cult of Android as a launch partner, too). What’s your favorite so far? Which one is the best at curating content you actually want to read?