This has been a banner year for the iPad in U.S. education – with tots to teens and university students using Apple’s magical device to learn.

How effective iPads are as a teaching tool is open to debate.

A small study, carried out by Michelle Riconscente, an assistant professor of education at the University of Southern California, offers some promising results, even with the necessary caveat that it was funded by the Motion Math app with a grant from the Noyce Foundation. 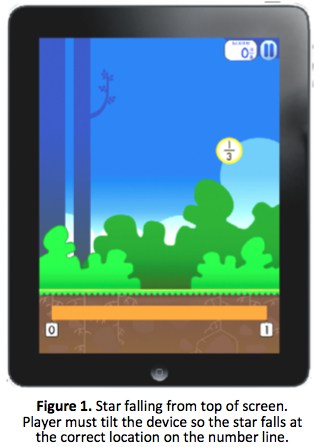 Riconscente studied 122 fifth graders in two Southern California schools to see whether their skills improved using the app. She was specifically looking at skills with fractions, described as “essential for future success in mathematics.”

Their skills were measured on a paper test vs. playing the game with similar questions on the iPad app. Interestingly, there were 34 items on the paper test; the iPad version of the test had 26 of the items,  due to the “inability of the computerized interface to render certain question types.”

Kids who used the app for 20 minutes for five days improved on a fractions test by an average of 15 percent compared to the control group. Using Motion Math also improved the kids attitudes about fractions by 10 percent – no small improvement if you remember how tedious they can be. The kids who used the app said they would gladly play it again or recommend it to their friends.

You can download the full report of the study in PDF here, or the summary published on GameDesk.