Reading the news on the iPad is one of the absolute best experiences you can have on Apple’s magical tablet device. So when news hit yesterday that our two favorite iOS news reader apps came out with updates, we were pretty stoked. While you probably heard a great deal about the other reader app, we wanted to tell you about the awesome news reader you might be missing out on. It’s called Flud, and it was just completely redesigned yesterday.

Besides sporting a major facelift, what’s spectacular about Flud is its new ability to make reading the news a social experience. Rather than relying solely on an app to recommend websites and content to you, Flud users have the ability to see what their friends are reading in the app and share content back with them rather than spamming their Facebook or Twitter feed with the 15 news stories they’ve read throughout the day. Giving each user the ability to create a “news personality,” Flud aims to change the way we consume news much in the same way that Spotify and Rdio have changed the way we listen to music, by allowing users to inspire and be inspired by others based on what they consume.

iPad owners that are familiar with Flud will be surprised by the changes the company has made to the user interface. Throwing away the mosaic interface that condensed multiple news feeds into a heavy stream of updating tiles, Flud’s new UI feels more like sheets of a magazine that you can glance at and flip through with ease. Explaining the reasons for the changes, Flud’s CEO, Bobby Ghoshal, told Cult of Mac –

We wanted users to focus on one news stream at a time so that they could get the most out of each source. We noticed a lot of users found the mosaic interface to be too inundating. There was too much to to look at. This new approach gives the content a lot more room to breathe.

Focusing on feed sources individually provides the reader with a feeling of comfort and security that the old design was missing. Rather than being bombarded by 50 tiles representing a different story from separate feeds screaming for attention, users can now swipe through individual feed pages, preview content and then swipe to the next feed page. It’s a lot like browsing the web, only a lot more efficient, and user friendly. Users can get a synopsis of 10 websites via Flud in the same amount of time it would take to do so on an internet browser. 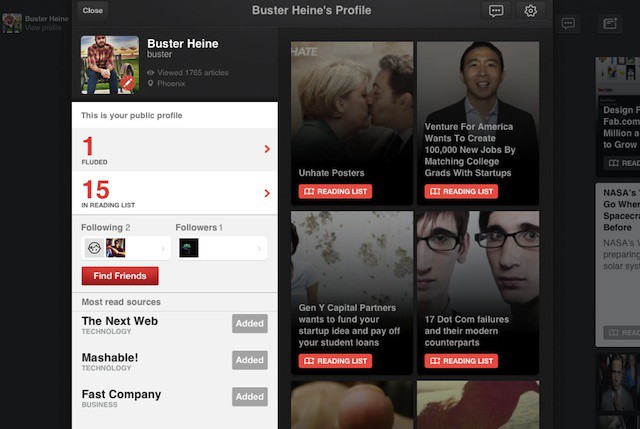 The new focused view on feeds allows readers to take more time with each feed to really absorb the content. Keeping readers in the app longer also fosters the growth of a social community that Flud will need for the app to gain ground on its competitors. Sharing stories is easy. Simply hit the heart icon in the righthand corner of every story you want to “flud” to your followers and the app takes care of the rest. You can share stories straight to Facebook and Twitter but that’s not the emphasis of Flud because the team behind the app hope that sharing news streams will become a two way stream, rather than a one way broadcasting lane.

We see the media space as having four facets; music, video, photos and news. Then I think of all the networks I use for each of those, where each product says something about my taste. I’ve got Spotify and iTunes for my music playlists, Youtube and Netflix for video, Facebook and Instagram for my photos, and yet the industry falls short on giving me something great for news. Flud is in a position to fill that void with a much more meaningful social integration. After you and your friends use Flud for a few days, you get to learn some amazing things about each other. For example, I’ve worked with my cofounder for two years but had no idea he was into gaming; now because of Flud, I can see all the gaming stuff that he Fluds everyday and I think that’s pretty great.

The idea behind Flud’s social layer makes a lot of sense for internet users who read multiple websites a day. On Facebook we share a few choice links with friends, but what if you want to see more of what your friend reads? The current cultures on Facebook and Twitter don’t take too kindly toward regular users that post 5-10 links a day. With Flud’s social features, sharing will shape reading experiences even more deeply than the attempts of previous social networks. 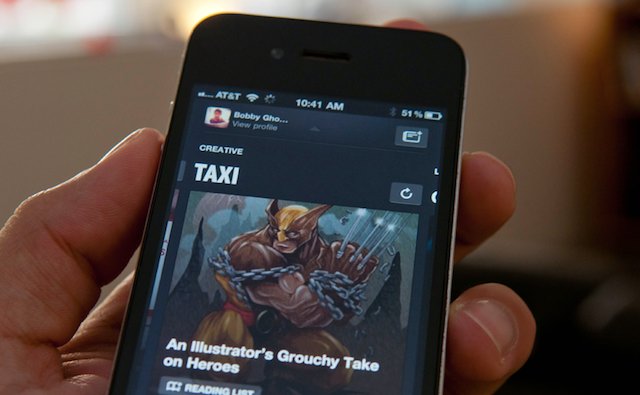 There’s no denying that FlipBoard is currently the premiere reader app on iOS. They’ve got a great team that have built an amazing product. But what might surprise you is how much Flud has produced over the last year, despite having a smaller team and fewer resources. In five months Flud built two products (iPhone and iPad app), wrote 4 million lines of code that resulted in 4 mobile app versions being tossed out, and transformed from an app developer to a social company. It took FlipBoard one year just to release their iPhone app (granted they were also perfecting their iPad app at the same time).

Flud has some of the best design in the mobile app space, and Flipboard does too. Flipboard focuses their time on the “lean-back” experience. We use all our time worrying about how to make information access faster and how to make social more meaningful for our users. In that sense, Flud was built for speed and relevance.”

In a way Flud doesn’t necessarily compete head on with Flipboard in terms of interface design and philosophy. They’re both great reader apps. You should put both of them on your iPhone and your iPad, but which one you choose to use really just depends on what you want to get out of the experience at that time. There’s no cut and dry way to determine which is better; Flud or FlipBoard. They both execute their philosophies really well, and provide a ton of value to their users.

I turn to FlipBoard when I’m feeling lazy. I let their curators tell me what’s great, and for the most part, they provide some really great content. But when I’m feeling adventurous and want to be in control, I turn to Flud to discover new websites that I haven’t heard about. If I want to get my news as fast as possible with a UI that’s a hell of a lot more entertaining than Twitter’s boring text heavy interface, then Flud is where the party is at. If I want to filter out all the crappy stories and just read the juicy bits in a beautiful digital magazine format, then I trust FlipBoard to provide me with that experience.

Let us hear it in the comments – Which of the two reader apps do you prefer? Why?

Flud for iPhone and iPad is available for free in the App Store. Make sure to add Cult of Mac to your list of feeds.
Number of comments on this postLeave a comment
Posted in: News Tagged: app, app development, CNN, Cult of Mac, design, Feedly, Flud, iOS, iPad, iPhone, News, news reader, programmers, Pulse, Zite