If imitation is the sincerest form of flattery, then this Chinese imitation of the MacBook Air is the biggest compliment that Apple has received in a long time. Cleverly called the “AirBook,” this feat of design plagiarism looks exactly like Apple’s MacBook Air.

Costing only $499, the AirBook possesses many similarities to Apple’s notebook, but there some crucial differences. Did we mention that it runs Windows?

M.I.C Gadget has posted a review of the AirBook. Here’s an excerpt:

The AirBook is an incredibly thin and light notebook computer. It measures just 13.1 inches by 8.82 inches (with a thickness of 0.75 inches tapering to 0.2 inches at its smallest point), and weighs a meager 3.1 pounds. We spent a lot of our time with it, and we can tell you that it’s even thicker and heavier than Apple’s Air, but it is as portable as the real thing. We think the knockoff makers have tried their best to perfect the AirBook down to the millimeter. 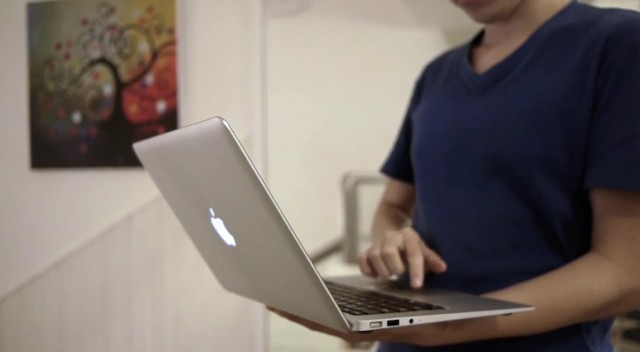 In the land of knockoffs, it doesn’t surprise us to see products like this coming out of China. (If you’ll remember, the Chinese have already replicated entire Apple Stores.) But the AirBook’s insane level of detail puts it in a category all its own. The ripoff boasts a 1.8GHz Atom dual core processor, 32GB SSD, and 2GB of RAM. Not too shabby for the price of an iPad.

Here’s how the AirBook stacks up against the competition performance-wise: 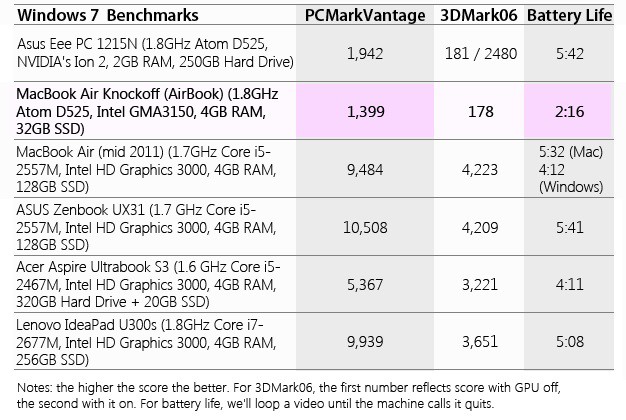 M.I.C Gadget calls it the “best-looking Windows laptop on the market,” and we would attribute that to the fact that it looks absolutely nothing like a Windows laptop. There are, however, small differences in the AirBook’s design (such as its unibody enclosure) that reveal how even the best knockoffs can’t match Apple’s design prowess.

We’ll see how long this thing stays on the market before Apple’s legal team pounces.