We told you about the recent release of Alfred 1.0, the popular app launcher tool for the Mac. The developers from Running with Crayons have created a robust, sleek, Apple-like tool for controlling nearly every facet of your Mac.

Most Alfred users understand how to open apps and files, but there are many things Alfred can do that may surprise you. The recent versions of Alfred support third-party extensions, and that opens up the door to all kinds of possibilities.

Disclaimer: Most of these tips, including all of the extensions, require the Alfred Powerpack, which can be purchased for around $20. If you want the most out of Alfred, you need the Powerpack.

Here are 5 awesome things you can do with Alfred on your Mac:

1. Launch Groups Of Apps And Files 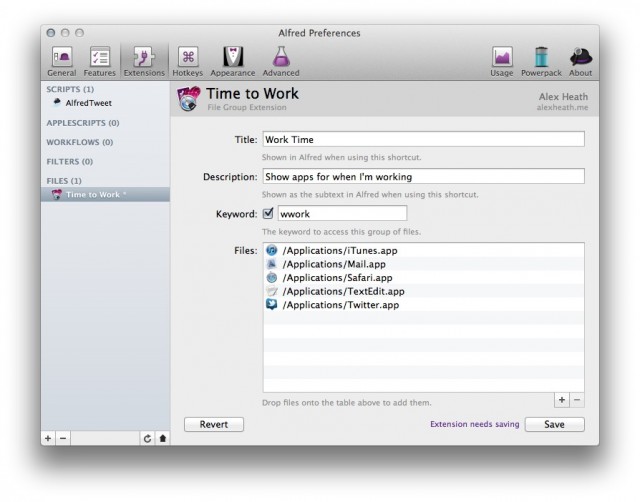 Powerpack users can create “File or Group” folders in the Extensions section of Alfred to launch a set of apps/files with one shortcut. This is a great tip if you have a certain set of apps and/or files that you use when you’re in a certain state of mind, whether it be working or relaxing.

Click the little “+” icon in the Extensions section and add a “File or Group” folder. Enter in your information to create the folder and set your shortcut and add your apps/files. Once you set a group of apps for when you’re working, you just have to type something like “wwork” into Alfred to launch all associated apps and files simultaneously.

When you’re adding files and apps to your folder list in the Extensions section, you can actually search for them in Alfred and drag them out of the search window into the Extensions folder you’re working on.

Thanks to a handy extension by David Ferguson, you can tweet with Alfred. David’s free extension, AlfredTweet, allows you to easily authenticate with Twitter on your Mac and send tweets by typing them into Alfred. There’s a list of commands that help you control your Twitter experience, including the ability to DM and follow users with quick shortcuts.

You can find out more about AlfredTweet on David’s website.

You can download Spotify Controls on its Github page.

There are multiple extensions for Alfred that allow you to interact with popular productivity apps for the Mac, including Evernote, Wunderlist, Things, Yojimbo, Toodledo, Remember the Milk, and OmniFocus.

Kristian Hellquist has created a free extension for Powerpack users that integrates with Evernote to let users search and create notes with Alfred. You can even add tags at the end of your notes to help organize. RebootIT also has an extension for searching notes in Evernote available on his website.

Wunderlist fans can use David Ferguson’s Wunderlist for Alfred extension to add tasks. You can also view lists of tasks with this extension.

Alfred’s own Andrew Pepperrell has created an extension for the popular productivity app called Things. With full support for the Things plugin syntax, users can interact with different Projects, Areas, and even due dates when adding tasks with Alfred. You can download the Things for Alfred extension from Andrew’s website.

Yojimbo users can install kaishin’s Send Note to Yojimbo extension. Toodledo users can download this extension to add tasks with that app.

Peter Rukavina has made an extension for integrating with Remember the Milk. He doesn’t have a simple download file, so users will have to perform manual setup steps to get everything up and running.

OmniFocus users can add this custom script in Alfred. The developer has outlined the setup process. 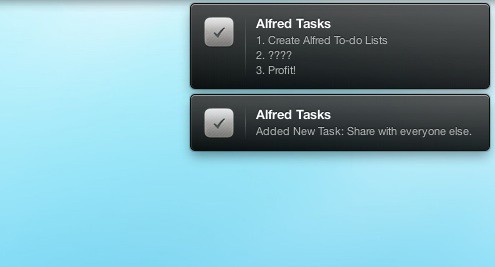 If you wish that you could just use Alfred to manage your tasks, then you’re in luck! David Ferguson has also created a beautiful Alfred To-Do List extension that uses Growl to let you simply add and display your tasks.

5. Interface With Your Network

Alfred can help you interface with your home network. The Get External IP Address extension retrieves your external IP address, copies it to your Mac’s clipboard, and displays it via a Growl notification. There’s also an extension for flushing your DNS cache, changing your Airport network location, and a way to get your network connection speed with Alfred.

You can launch an HTTP server from a specific folder with an extension. Alfred can be used to initiate screen sharing between Macs. This extension lets you type a quick shortcut to enable screen sharing on the same network. The Control Your Mac section of the Alfred extensions gallery has a very good list of similar tools for enhancing Alfred’s functionality on your home network.

There’s so much more to Alfred than what’s mentioned above. You can run AppleScripts and Automater workflows, look inside your files, create custom web triggers, shorten URLs with bit.ly, translate text with Google, sync your preferences between computers with Dropbox, and much, much more. We’ve simply scratched the surface.

You can learn how to create and submit your own extension to Alfred’s curated gallery if you have ideas. Let us know how you’re using Alfred on your Mac in the comments below!