Look, we hate crappy iPad knock-offs as much as any red-blooded Apple fan, but we’re going to make an exception in this case. Why? Sure, the knock-off tablet looks gaudy, but the Chinese student who built it didn’t make it to cash in on Apple’s brand: he made it for his girlfriend out of love.

According to China Daily, Chinese college senior Wei Xinlong wanted to give his girlfriend Sun Shasha an iPad 2. The only problem? Wei couldn’t afford one. All he had was $125.

That’s when Wei got clever. He took an old laptop he had lying around and purchased a touchscreen and new battery for it online. Then, studying YouTube videos on building your own tablet, Wei spent ten days transforming the odds and ends into an iPad-alike, complete with Apple-themed wallpaper and a cute rhinestone fringe.

Okay, it’s nothing like a real iPad, we know. But if there’s any truth in the gift-giving adage that it’s the thought that counts, the thought here is just ineffably sweet… and it sure beats the alternative of tossing aside his college education and getting a job at Foxconn to make his girlfriend a real iPad himself. 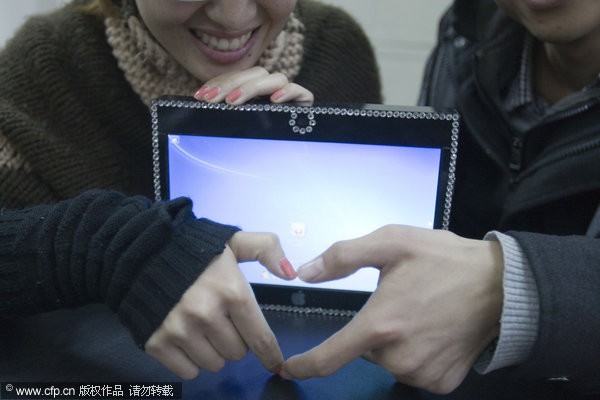